Fergie Lost Faith In God In Moscow Against Chelsea 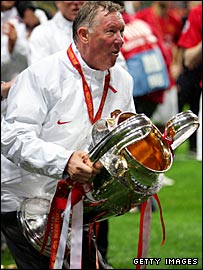 After Cristiano Ronaldo missed his penalty, I was just waiting for Chelsea to miss one of theirs. I was uncomfortable, but I wasn’t panicking. It was only as John Terry stepped up that the reality of the situation hit home. There were no second chances after this. If Terry scored, it was all over. Fifty years on from Munich, forty years on from first winning the trophy, it could all be taken away from us with one kick from Terry.

God was onside that day. Maybe I hadn’t prayed loud enough back in 1995 when we couldn’t buy a goal at Upton Park, and maybe I had enunciated properly when Patrick Vieira stepped up to take the penalty in 2005.

I remember years ago watching the local news ahead of a Liverpool United match. There was a scouse priest on the telly claiming that he, along with his congregation, had been praying for a result. United won the game regardless and the priest was back on the news after the weekend. The priest was asked whether this proved God doesn’t exist. The priest was quite defiant in his answer. “No, it proves God does exist… but He’s a United fan.”

As Alex Ferguson stood on the touchline, watching Terry step up, he’d already done his praying. “When they took their second-last penalty I clasped my hands and I prayed,” Ferguson has admitted. “He nearly saved it, Van der Sar. But once the ball went in I said to myself, ‘Don’t ever pray again.’ Because when I was in my first cup final as manager of Aberdeen we were 1-0 up, and Rangers scored two goals in the last two minutes of injury time… I had prayed as well, that day, and I thought I would never do it again. They beat us 2-1, even though I had prayed to God.”

He stood there though, looking rather composed, awaiting to find out his fate. Would he have two European Cups to his name, or was he going to be denied by the last kick of the ball? Was he confident, or did he think it was all over?

Fortunately, we weren’t done. In case you missed out on what happened next, this short video should fill you in.