Fergie: My Favourite FA Cup Match? Have A Guess! 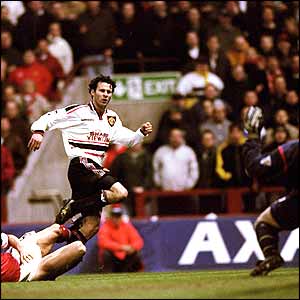 “Don’t pass it to Yorke!” I remember shouting at the television, as Ryan Giggs got increasing close to Arsenal’s box. In hindsight, I’m not sure what I was expecting him to do with the ball, I just didn’t want him to pass it to Dwight Yorke. Not to discredit Yorke, who had a phenomenal season, but he was going through a bit of a goal drought and I just didn’t trust him to find the back of the net at such a crucial moment. Equally, I didn’t expect Ryan Giggs to take on the best defence in England, arguably Europe, and rifle the ball in to the roof of David Seaman’s net either. But he did.

The game was full of drama. Beckham opened the scoring after just seventeen minutes, with Teddy Sheringham setting him up to score a fantastic goal from 30 yards out. With 20 minutes remaining, Denis Bergkamp had a go, and thanks to a wicked deflection off Jaap Stam, levelled the score.

Five minutes later, David Ellery took great pleasure in sending off Roy Keane for a second bookable offence after a foolish challenge on Marc Overmars, only before Nicolas Anelka thought he’d scored the winning goal for Arsenal. Fortunately, the linesman correctly spotted Anelka in an offside position and ruled the goal out, after several minutes of ecstatic celebration from the unsuspecting Arsenal players and fans.

Just as it looked as though we were going in to injury time, which was not a mouth watering prospect for United, who’d already been playing with ten men for over 15 minutes, Ray Parlour burst in to the United box. Phil Neville, playing at left back, went to ground and got nowhere near the ball. Blatant penalty. Neville lay on his front, holding his head in his hands, knowing that single handedly he had probably cost United their chance at winning the FA Cup, and therefore the Treble.

Denis Bergkamp stepped up confidently and there seemed no point in watching. I did anyway, waiting to be put out of my misery more than anything else. Bergkamp choked, kicking the ball tamely to Peter Schmeichel’s left, at perfect height, allowing him to palm it away from danger. David Beckham was swatted away as he went to hug the Dane, who was now eager to go out and win this match. Nobody expected Bergkamp to miss and now, all of a sudden, there seemed a real sense that the team with ten men would do the business.

In the second half of extra time, Arsenal were comfortable with possession. Patrick Vieira was on the ball inside United’s half, and played a pass across the field. Not a single Arsenal player in sight, Giggs picked up the ball just level with the edge of the centre circle on the left wing. I was just grateful to have the ball, the clock ticking down to penalties and reds trying desperately to think of who our five penalty takers could be. Yorke, Beckham, Scholes, Giggs… Butt? Stam? Schmeichel??

Vieira got back across the field, but Giggs passed him with ease. Next came Dixon, a dip of the shoulder, and he was left for dead. Keown came across, sandwiching Giggs between himself and a recovered Dixon, yet still Giggs kept running, breaking in to the Arsenal box. There he was, running in to a seemingly impossible angle at the corner of the 6-yard box, Tony Adams sliding in, Dwight Yorke behind him, Paul Scholes waiting close to the back post. So naturally, Giggs hit the ball as hard as he could, sending it flying in to the roof of the net, over David Seaman’s fingers, leading to the goal celebration which still melts the hearts of lasses all over Manchester. Swirling his shirt around his head, it is Phil Neville who meets him first, wrapping relieved arms around our Welsh winger, and then joined by the whole team and fans who spilled over from the stands. By the time the goal went in, we’d been playing with ten men for 35 minutes, just three days after going in to extra time with the same team, our players were knackered. It was a moment of magic which seemed to sum up what would become the most magical season in our fine club’s history.

Ryan Giggs and David Beckham were carried off the field by the fans that day, us all knowing we were sharing in something special. Goals like Ryan Giggs’ that evening weren’t scored for nothing.

United face Arsenal in the FA Cup again today, our last meeting in the Cup coming when we were cruelly denied victory at Cardiff in 2005. After battering Arsenal and failing to find the back of the net, we lost the Cup on penalties. Today is the day for redemption. Redemption from that FA Cup Final 05, redemption from the derby day defeat last weekend, from Gallas’ injury time equalising goal a few months ago, and from Arsenal doing the double over us last season. Tomorrow is for Ruud van Nistelrooy, for Roy Keane, for Ole Gunnar Solskajer, and for every other United great who has dealt with Arsenal’s venomous players and fans. It is a must win game and Sir Alex Ferguson knows this all too well.

Ahead of the game, Ferguson was quizzed about United, the FA Cup and Arsenal. When asked to pick his favourite FA Cup tie from 1999, where we knocked out Liverpool with goals in the 89th and 90th minute, beat Chelsea after a replay, as well as former rivals Newcastle in the final, Fergie responded, “well what do you think it was?” Of course, there could only be one contender. The FA Cup semi final replay against Arsenal. “I watched it on video three months ago,” Ferguson added. “And it is such a fantastic game. There were penalty kicks, deflected goals, Roy Keane sent off. It was marvellous.”

United need a win today and following a week of depression and disappointment, I’m confident we’ll get it. It was victory back in 1999 against Arsenal in the Cup that could take credit for us going on to winning the league. The team with ten men battled it out and won the match and this undoubtedly had negative effects on Wenger and his team. The psychological advantage we could again gain with a win today is an exciting prospect.

If it takes deflected goals, red cards and injury time penalties to get us the victory, then I’ll take it, for the good of our run in the Cup as well as the league. But for the benefit of my heart, I’m keeping my fingers crossed for an easy 2-0!

Are we going to get the win?