Fergie: Three Games Away From Champions 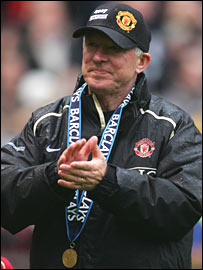 Manchester United take on Arsenal this afternoon, knowing a victory strengthens our title bid and finishes Arsenal’s season. In contrast, a defeat would blow the title race wide open.

Sir Alex Ferguson, who has been in this situation time and again in his trophy filled career with the club, is confident that the title will be staying in Manchester. We have a tricky time in regards to fixtures, playing Arsenal today, Blackburn away next weekend, followed by Chelsea away. However, Fergie is confident that victory is these three games will be enough to retain the title.

“We have to win our next three games and, if we do, we’ve won the title,” said Fergie. “We could go to Chelsea and win in there, or we could lose it there if we don’t win our next two games. We have 77 points and a better goal difference than our rivals, so to win the league we have to win the next three matches. A lot can happen and the title could do to the wire, there’s no doubt about that – it’s very exciting. This is a difficult league to win and if we have to go to Wigan in the last game of the season and need to win to take the title, that’s fine. If you said that was the case in August you would have taken it. I’m delighted with the way the players are performing and the freshness and energy is terrific.”

Reaching a points total of 89, assuming our goal difference remains superior, would be enough to make it mathematically impossible for Chelsea to win the league. If we were to win our next three matches, that would put us on 86 points, with Chelsea losing against us to go 6 points behind. For Chelsea to win the league at that point, United would have to lose their two remaining games against West Ham and Wigan, as well as surrending our 18 better goal difference. But United do have to win their next three games to be put in this favourable position.

What are the chances of United beating Arsenal, Blackburn and Chelsea?