Fergie: We Finally Have A Class Of 96 Repeat 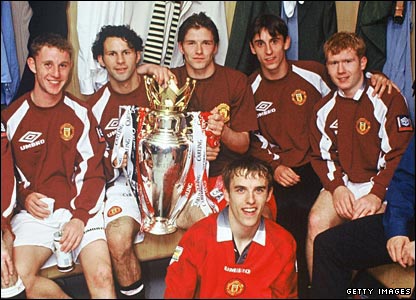 There are several phrases that get brought up time and again in football. “They think it’s all… it is now” is the most famous of these, whilst “…and Solskjaer has won it!” means the most to United fans.

But a quote that is mentioned time and again for the wrong reasons in Alan Hansen’s “you’ll never win anything with kids”, after watching United lose their opening game of the season to Aston Villa. Come May, he was left with egg on his face.

Since the likes of David Beckham, Paul Scholes, Nicky Butt and the Neville brothers broke in to the team, winning the Double in their first season, we haven’t been able to provide such a wealth of talent again.

Wes Brown, Darren Fletcher and John O’Shea are the longest serving players in the generations of youth team players that has followed, whilst other products of our youth team are dotted all around the Premiership.

The fact is, the players that emerge from our youth team have had an impossible act to follow. To have so many English lads come up through the ranks in one year, who are of the quality of those players who came through in 1996, is a pretty much impossible feat. Yet our youth team products will always be compared to them, giving them an unfair disadvantage.

However, Ferguson reckons our recent batch of youngsters is the best we’ve had in 15 years.

“We’ve got a group of young players who are doing very well and showing fantastic potential,” said Ferguson. “Rafael Da Silva, his brother Fabio, Rodrigo Possebon, Darron Gibson, Jonny Evans and Danny Welbeck are the type of youngsters we’ve always tried to have here in the last 15 years or so. They can take over from the younger lads in the squad who will move into the middle-age section and they, in time, become the older players. That’s what you call managing change.”

Ferguson singled out Johnny Evans, who has seriously been considering a move away from United, and Rafael Da Silva, whose brother is currently out injured, for special praise.

“Evans will be a future United centre-half, there’s no question about that,” Ferguson added. “He’s 20-years-old and in a few years time his career is absolutely guaranteed. Young Rafael is an outstanding talent. He proved that against Aalborg. He’s an attacking player with great belief in himself.”

Do United finally have another group of youngsters who will cut it as first team starters in the next few years?