It was a very disappointing day for Manchester United as they suffered a humbling 3-0 defeat at the hands of Everton at Goodison Park. James McCarthy, John Stones and Kevin Mirallas goals condemned United to back-to-back league defeats for the first time under Louis van Gaal and put their quest to finish in the top four on hold. The Red Devils are still in a great position but must step up their game in the final four games.

Van Gaal opted to make just one change to the team which were unlucky to lose at Chelsea last week with Daley Blind returning to the starting line-up in place of Radamel Falcao, who dropped to the bench. Wayne Rooney returned to his preferred striking role but both he and Marouane Fellaini, who used to play for the Toffees, both failed to have an impact on the result. It was a convincing win for the hosts and it did not make pleasant viewing for United fans.

Here are five key thoughts following the defeat at Everton. 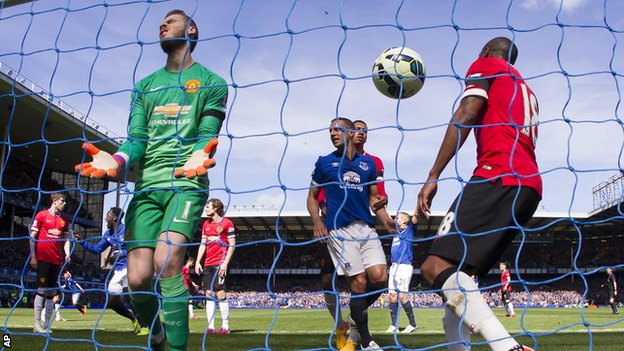 1) Van Gaal’s stubbornness comes back to bite him

The 4-3-3 system which Van Gaal has reverted too in recent weeks has worked well. Wins against Tottenham, Liverpool and Manchester City was followed by an unlucky defeat at the hands of runaway leaders Chelsea but United really came unstuck in this one. Everton came with a game-plan which was allow United to pass the ball in front of them and spring into life on the counter attack. It was a plan that worked superbly.

Saying that, Van Gaal had plenty of opportunities to change the system and the style of play but he failed to do so. Taking the ineffective Fellaini off for Falcao at half time was not enough. United needed to put more balls into the box and throw more men forward in order to come back from the two-goal half time deficit. With Angel Di Maria and Robin Van Persie sat on the bench, they had two game-changers but both were introduced far too late to have a say on the result.

Blind was tasked as United’s chief ball recycler in front of the back four but did not do a good enough job. He was far too slow in possession and lacked any sort of presence to dominate that area of the pitch. He proved that he is a better left-back and is not the long-term successor to the absent Carrick. The Englishman has been severely missed by United in the last two weeks.

Carrick’s job often flies under the radar due to the calm and effective way he goes about it but when he isn’t in the midfield, it become noticed. Carrick is able to smell danger and experience in that role has allowed him to position himself expertly. His ability on and off the ball was missed on Sunday and United have a huge task replacing him long-term as he must only have one or two more years at the top level left in him.

United lack any sort of penetration in the final third and did not make enough clear-cut opportunities. They lacked that extra bit of quality what is required in tricky away games such as this one and the failure to bring Di Maria on earlier was a mistake. United need reinforcements in attacking areas of the pitch if they are going to become title contenders next season under Van Gaal.

There have been major rumours surfacing this week that Memphis Depay and Ilkay Gundogan will be heading to Old Trafford this summer. They would both be most welcome. Depay would add both goals and assists from a wide area but would also add that directness and an unpredictability factor which has been lacking. Meanwhile, Gundogan’s energy in midfield is needed as United were far too static on Sunday. The Red Devils may also need another, more pacey option in attack as Falcao has failed to deliver in a United shirt.

4) The defence needs a serious re-vamp too

Not only do United need to be in the lookout for a long-term successor to Carrick, who has enough presence and strength to dominate a midfield battle but the shaky and make-shift defence needs a re-vamp too. For starters, Antonio Valencia is not a right-back and although he has done an adequate job this season, cannot be relied upon consistently to perform in an unnatural position.

Chris Smalling has had an excellent season, deserves his new deal and should be given a further opportunity to push on next year. However, who lines up next to him is anyone’s guess. Mats Hummels would appear to be the fans choice after consistent links to United for over two years. There are other options out there but United do have Phil Jones, Paddy McNair and Marcos Rojo on their books to fight for that spot. Meanwhile, Luke Shaw and Blind should be the two fighting to play at left-back.

5) Four games left and all should be winnable

United have four fixtures remaining this season and currently sit seven points clear of fifth-placed Liverpool, who have played a game less. Some may sit there and say that there is no chance of that gap being overturned but I can assure you, there is a chance, especially if Brendan Rodgers’ side win their game in hand against Hull in midweek. Remember, United surrendered an eight-point lead over Manchester City just three seasons ago to hand their neighbours the title.

However, United’s fixtures do appear to be quite kind. They have to face West Brom and Arsenal at home and have to travel to Crystal Palace and Hull. On paper, they are all winnable encounters but United will have to play with more purpose than they did against Everton. Nine points will be enough to take at least fourth spot but a maximum of 12 should definitely be attainable.