Manchester United picked up a 1-0 victory away at Newcastle on Wednesday night to remain in fourth place in the Premier League. Ashley Young scored a late winner following a Tim Krul error to secure Louis van Gaal’s side the three points and a third straight victory at St James’ Park.

The Dutchman opted to pick Marouane Fellaini over Radamel Falcao in United’s only change with Ander Herrera starting a fourth consecutive league game for the first time in his United career. Angel Di Maria was substituted on the hour mark once again in a slightly better but still rather ineffective display. It may have been a scrappy game with few chances but van Gaal will just be happy to pick up the win. 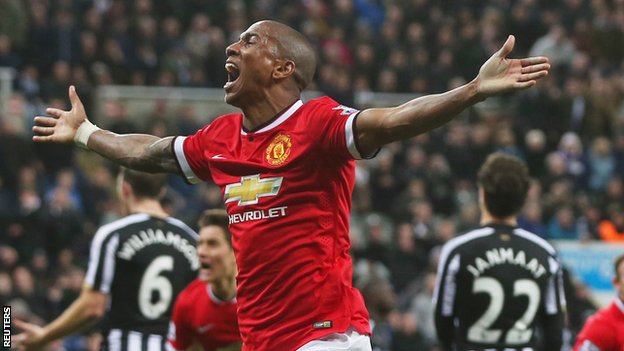 1) It could be an unbelievably crucial three points

On a match-day where all of the top seven picked up victories, this game quickly became a must-win game for United. The Krul error and composed Young finish could prove vital at the end of the season with the race for the top four likely to go down to the wire. The 1-0 win kept United’s two point gap over an in-form Liverpool side that beat Burnley at Anfield on the same evening.

United’s next three games are against Arsenal in the FA Cup then Tottenham and Liverpool in the league. It is a period which could make or break the Red Devils’ season and three games which will test how far this side has come. Certain players need to improve but United are dominating games, it is just a case of upping the tempo and creating more chances on goal. Sounds easy, doesn’t it.

2) Spitting is a cowardly act

Unfortunately there was an incident on the halfway line between Jonny Evans and Papiss Cisse which needs talking about. The Northern Irishman appeared to spit in the direction of the Newcastle striker when he was on the floor then it seemed Cisse retaliated with a spit of his own. It was a wholly unsavoury incident which has no place on the football pitch and both players should be ashamed of themselves and deserve to be banned accordingly.

Paul Scholes, who was a pundit on BT Sport, and van Gaal both stated post-match that Evans is “not that type of player.” Whilst it is probably true that is unthinkable that the central defender is not usually like that, things happen in the heat of a moment in a game that are morally wrong. This is one of those moments and Evans should be banned along with the Newcastle striker, who was completely idiotic to retaliate.

3) The reaction to Jonas Gutierrez’ return was phenomenal

A mention needs to be given to Newcastle winger Jonas Gutierrez, who returned following his recovery from testicular cancer to a standing ovation from both sets of supporters. It was a phenomenal moment which those in attendance will remember forever.

We can moan about United’s style of play and league position all we like but there are important things to think about. The last two years of Gutierrez’ life were a huge struggle and his courage and commitment to beat the awful disease is amazing. We all wish the Argentine well and hope he is able to reach the same standard which saw him win 22 caps for his country. Good luck to him.

4) Ashley Young deserves a new contract and an England recall

Young’s winner was the culmination of a season which has seen him win over the United faithful with some lively displays. The winger has outshone summer signing Di Maria and Falcao in recent times and become many people’s choice to start every game. Young has had plenty of critics in the past from all sections of the footballing world but it is fantastic to see him proving them wrong.

Young’s form should see him given a new contract in the summer and with the England squad announced in a few weeks’ time, it would now be a shock not to see the in-form winger in Roy Hodgson’s squad. The former Aston Villa man is one of the only player who looks determined to make something happen or take a risk and it is clear that van Gaal has had a majorly positive influence on his career.

In a way it is sad to see Falcao failing so badly at United but in truth, his recent performances did not merit him coming off the bench as the Red Devils went in search of a late winner. The fact the much scrutinised Fellaini was preferred to the Colombian from the start shows how far his stock has fallen. This situation would have been unthinkable when he arrived at Old Trafford on Deadline Day last summer.

It is my belief that he has had his chance and there is now no way that he can prove to anyone that United should splash £40million+ for his services. It is clear the strike-force needs an injection of youth and pace or at least an alternative option that is not coming off the back of a serious injury. I compiled a list of five possible alternatives, all of which I believe would be better options than Falcao. It is very sad to say this but it appears his time is up.