Manchester United defeated Burnley 3-1 to move back up to third place in the Premier League table. An unusual brace from centre back Chris Smalling and a Robin Van Persie penalty sent an extremely under par United above Southampton, who were held to a goalless draw at home to West Ham.

Louis Van Gaal opted to field a similar starting line-up to the one that salvage a late draw at Upton Park last weekend. After Sam Allardyce’s long ball quote, the Dutchman was not flustered and decided that only two changes were necessary with Paddy McNair and Jonny Evans coming in for Antonio Valencia and the suspended Luke Shaw. 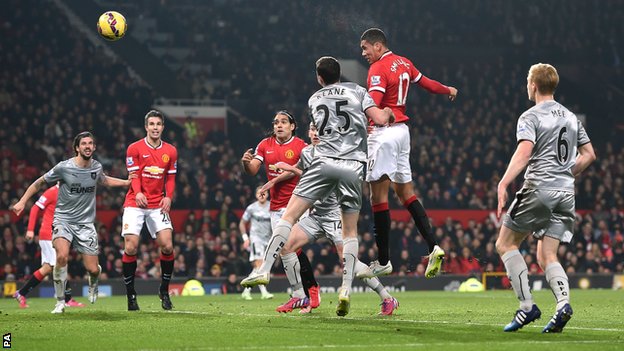 Burnley were undoubtedly the better side in the first half and did not deserve to go into half time with a deficit. Like Sir Alex Ferguson, I’m a big fan of Sean Dyche. He has his team set up excellently. They are both disciplined and compact defensively but they can attack in numbers when they want to. The Clarets are well drilled and their high pressing was effective against a lacklustre United midfield in the first period.

The visitors had numerous chances to open the scoring during an opening 45 that saw Danny Ings net his fifth goal of 2015. If anything the 2-1 half time lead United took into the break was a bit of a smash-and-grab. Unfortunately for Burnley, the second period was a different story as Van Gaal recognised United’s issues and addressed them accordingly. The diamond was changed to a more conventional 4-4-2 system and the width it generated offered obvious out-balls.

There’s a stat for you. Chris Smalling made Premier League history with his first half brace at Old Trafford. The central defender is known for his inconsistency rather than his goal-scoring prowess but he certainly proved effective on set pieces here. Although Burnley will be annoyed to concede both from a dead ball position and twice to a defender, Smalling got his rewards for getting in the right position and finding the net.

In fact, in that opening half, the offensive display was so poor, nobody else looked like scoring. Radamel Falcao and Robin Van Persie were almost anonymous whilst Wayne Rooney was forced to move into the defensive midfield role when Daley Blind was forced off with head injury. Although United got away with it tonight, they will need Blind and Michael Carrick back for tougher matches to come.

Luke Shaw was sent off late on against West Ham which meant United were forced into yet another defensive re-shuffle ahead of this clash. It meant Marcos Rojo was shifted across to left back with Phil Jones and Evans starting in central defence and McNair at right back. However when Jones was forced off in the early stages, Smalling was introduced into the fray and we know what impact he had on proceedings.

But despite his two goals, Smalling and Evans looked very shaky at the back which contributed to Burnley racking up double figures in attempts on goal in the first half. It was Smalling who lost Ings for Burnley’s equaliser but Evans looked a shadow of his former self once more as there were several occasions where the pair got mixed up and the ball broke to Ings or Ashley Barnes in the box. Shaw’s return can’t come quickly enough as United missed Rojo in the centre of the backline.

Although I may be repeating myself, this point needs re-iterating. Falcao and Van Persie cannot play together and Van Gaal must drop one of the pair. It was the Colombian who was sacrificed in the second half but in my opinion, Falcao deserves a chance to impress on his own up front. He hasn’t had that opportunity since moving to the club. The duo want to run into the same spaces and the partnership hasn’t been working and never will.

But this performance against Burnley was perhaps the worst of the lot. Both were rendered anonymous by an organised Clarets defence. They do need better service but there comes a stage where they have to get involved in the game slightly more. This stat says it all – Van Persie’s penalty was the only shot that either striker managed in the 90 minutes.

5) Di Maria and Januzaj look dangerous when moved out wide

As aforementioned, the first period was extremely frustrating to watch. The midfield was unbalanced from the outset as Blind played behind Rooney, Di Maria and Januzaj in a narrow diamond system. However, when Van Gaal switched Di Maria and Januzaj to either wing in the second half, they were excellent and showed signs that they could be a real force if they are played there regularly.

Time after time, the pair found space and were able to show off their electric pace and silky dribbling ability. Di Maria in particular beat his man on countless occasions and eventually won United a penalty after having an earlier claim turned down. Meanwhile, the Belgian youngster looked livelier than he had done in recent weeks and he is showing signs that his confidence is building. It would be nice to see them start in those wide positions against Preston next Monday.