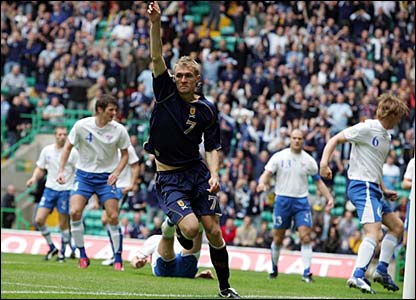 “I can’t understand why people in Scotland rave about Darren Fletcher,” Roy Keane said in that interview with MUTV, which ultimately saw him leave Old Trafford. I had to agree with him. It was 2005 and Fletcher was getting in our squad far too often. I’d complain about it, but then, we didn’t actually have anyone better. Dark times.

Things are much different now, in terms of our squad, and, giving credit where it’s due, Fletcher’s performances. We have added Owen Hargreaves, Anderson and Michael Carrick to our central midfielder, and Fletcher, who has played in 5 of our 6 league games this season, has really improved his game.

He has steadily proven himself as a player who will show up for you in the big games. Give him a specific job to do, and he’ll get on with it. I don’t suddenly think he’s World class, but he is a good player to have in the squad.

Some things haven’t changed though, and that is the Scottish opinion of him, as he is set to captain his country in his 40th game for them at the weekend.

“Darren has been an outstanding player for Scotland for a number of years,” said the Scottish manager, George Burley. “At the same time he has established himself as a regular player for one of the biggest clubs in the world. Since I took over, his attitude towards playing for his country has been outstanding. He is a player who is always desperate to represent Scotland. It is a measure of his talent that at his relatively young age he has achieved so much for his club and will win his 40th cap for his country on Saturday. I know he will be very proud to lead the players out at Hampden on Saturday. He will do a great job for Scotland.”

In regards to other International news, Manucho has been called up to the Angolan squad, whilst Wes Brown, Rio Ferdinand, Wayne Rooney have all been picked by Fabio Capello. Patrice Evra is expecting to hold on to his starting place for France, and Edwin Van der Sar has agreed to help out Holland, playing in their next two matches following injury troubles, despite retiring after Euro 2008.