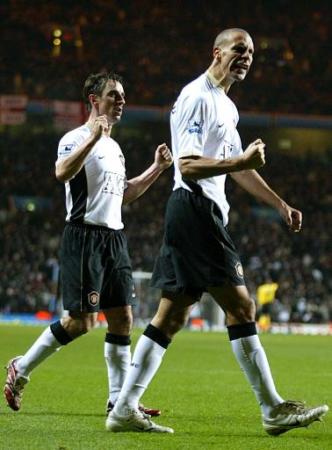 The lengthy ban and extortionate fine dished out by the FA to Rio Ferdinand is something I have challenged time and again on this blog. There have been countless incidents which are comparable to that of Ferdinand, from Christian Negouai to Adrian Mutu, where their punishments were nowhere near as severe as that of Ferdinand.

He was ‘made an example of’ and therefore treated ridiculously harshly. He might as well have been tarred and feathered.

Former FA executive director David Davies has revealed what was going on behind the scenes after this decision was announced, with United captain, Gary Neville, instructing that the players went on strike in defence of Rio. Despite David YSB James insisting that they played their match against Turkey, it was Ferdinand who had the swaying vote, telling them not to boycott the game.

“Rio was devastated,” said Davies. “My recollection is that he showed a quiet dignity. He was in tears, fearful for his future. Maybe because I’d known Rio for a few years, he didn’t go ballistic. Insults never flew across the table. When the (England) players gathered, the mood soon turned mutinous. Sven was caught in the middle. Employed by the FA, Sven’s loyalty lay with his players. ‘Can you come and see if there is any way through this?’ he asked me.”

Whilst others were more passive in their reaction, Gary Neville went apeshit, and stirred the players up enough that a strike was on the cards.

“I was informed Gary Neville was leading the charge against the FA,” continued Davies. “Somehow, this news did not surprise me. Gary was a leader, who cared passionately about those who sat alongside him in the dressing room. Some at the FA were stunned by the scale of the revolt stirred up by Red Nev. The new director of communications, Paul Barber, went in to talk with Gary and was almost knocked back by the strength of feelings. No Rio, no game, came the message from Gary Neville.”

However, not all were as steadfast in their support, obviously not bothered by the fact that it could have just as easily been one of them who returned home after training without taking the drug’s test.

“Some players confided to me they would never turn their backs on England,” Davies said. “At one of several meetings, David James stood up and urged everyone to consider the ramifications if they went on strike. Their vilification in the press was already at fever pitch. The impasse was broken when Rio told the players not to boycott the game. Just in time. If Red Nev had persuaded the squad to strike, the FA would have instructed Sven to call up new players. The FA were simply not prepared to forfeit the game.”

Despite United losing out on the title that season and Ferdinand being denied another opportunity to represent his country in the European Championships, Davies reckons the whole experience has been a positive one for our future captain.

“Adversity makes people stronger and Rio is now respected as one of the world’s leading centre-halves,” he said. “The missed drugs test may have acted as a wake-up call to Rio. Perhaps some good came out of it after all. People praise Rio’s new maturity these days. The whole saga also showed the FA’s drug-testing programme worked. Since the Rio fiasco, I am not aware of anyone missing a drugs test.”