Get Out The Essien Calculator... Chelsea Are Going To Win The League! 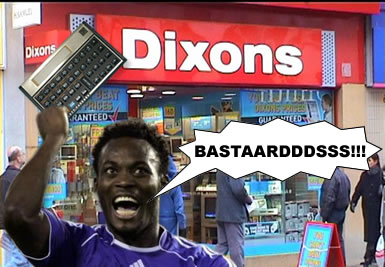 Michael Essien had trials at Manchester United aged 17-years-old. After growing up idolising Roy Keane, he was eager to sign for us, however the issue of a work permit denied him the move.

“My biggest hero was Roy Keane,” he confessed. “I just loved the way he used to play, his attitude and commitment. I still try to play like him now and maybe people compare us as I play a similar holding role in midfield as he used to. I had always dreamed of playing in Europe and, as a boy, my team were Manchester United. When they offered me a one-week trial I just couldn’t believe it, I was so happy. I remember being there and thinking ‘Wow, this is the biggest club in the world’.”

However, come 2005, when United were desperately seeking to find a player to fill Roy Keane’s boots, Essien was off to Chelsea, the current Champions, as quickly as his legs could carry him.

After enjoying another title win for Chelsea in his first season at the club, Essien had a problem dealing with United leading the table from the start of the following season. Come Christmas, he certainly had endured enough!

“We are much better than Manchester United,” he said in December 2006. “It is just a matter of days before we are the leaders. I have done the calculations and we will finish at least five points clear of United at the top of the table.”

So you might be pleased to hear that Essien, who has come second to United for two seasons in a row, as well as losing out to us in the European Cup final, has predictions for the coming season.

“We’ve got the best players in the world at Chelsea and by next May will be the only team in contention. Chelsea will win the title this year,” Essien said. “Players like Ballack, Lampard and Deco are world class. It is to our advantage that we have so many players who have achieved so much. As you can see in training or during the games, they can always change the games. They have a winning mentality so it’s going to be good for us. Hopefully this year we will win more trophies. Last year was unlucky for us, these things happen in football but you just have to forget about it.”

I suppose we have to wait a bit longer before Essien lets us know just how many points they’ll beat us by…afterall, we hardly have any players who have achieved so much in the game. And winning mentality? We can only dream of having such players in our squad. Damn, we’ve just been so lucky!