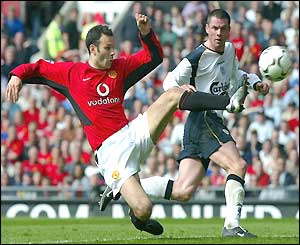 During what was otherwise a rather disappointing season, with just the League Cup serving as consolation for silverware, a big highlight was the last minute winner against Liverpool at Old Trafford. In a game where we’d been second best for large chunks, to pick up all three points, at the death, was an incredible feeling.

Rafa Benitez, who as yet, has failed to get his tactics right on his travels to Old Trafford, made the crucial error of subbing off Sissoko for Kromkamp for the 89th minute freekick. Ferdinand was Kromkamp’s man, however the player hadn’t had time to settle, meaning Ferdinand’s task of guiding his powerful header past the glove of Pepe Reina was easier than it should have been.

The goal was scored in the Stretford End from Ryan Giggs’ freekick, with Gary Neville being left in our own half to defend a possible break from Liverpool. As the ball hit the back of the net, he charged to the away end, who’d been giving him grief all match, as they do every time the teams meet, shouting and holding up the badge. He celebrated like every proper red would and his status amongst our following grew massively.

Ahead of the Liverpool game this afternoon, Ryan Giggs has spoken about the rivalry between us and them, claiming whilst loving every victory over the scousers, he’s happy to leave Neville on the receiving end of the stick.

“I think I’ve always shown the right respect to Liverpool and the history they have and great team they are,” said Giggs. “But I also know that it’s the team I get the most pleasure out of beating. There’s been controversy over the years because the rivalry on and off the pitch is massive but getting involved in that has never been part of my make-up. I try and just stay out of it, leave it to the likes of Keaney and Gaz.”

Giggs spoke of the time his signature was torn up in his face after it had been requested by a young scouser. “That was a shock,” he recalled. “I mean, when someone asks you for your autograph. For the first couple of years of my career it was the biggest disappointment. I’d had such a rise into the first team and everything had gone well and that was my first real slap. You grow up quickly in football and the important thing is how you react.”

Giggs reflected on the Liverpool ties of the past, claiming that despite the influx of foreign players, there is still as much rivalry as ever between the clubs. “I think the fixture’s as intense as it ever was,” he said. “The foreigners who come to United soon realise this is a big game, in many people’s eyes the biggest of the season. There’s a responsibility among the older players at United to let the younger players, particularly foreign ones, know what it is to beat Liverpool, to perform at the top level.”