Giggs: This Is The Best Team I've Played In 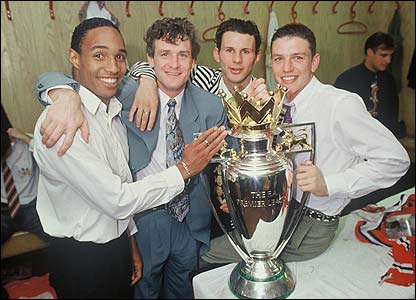 Ryan Giggs has won ten English league titles, more than any of player in the history of the game, but he hasn’t finished yet. With United favourites to win the league this season and a contract extension on the cards, it is possible that Giggs could hang up his boots with twelve league titles to his name, three more than any other player.

He has shared a changing room with the likes of Bryan Robson, Mark Hughes, Roy Keane, Eric Cantona and David Beckham in the past, but believes this current side is the best we’ve had.

“Last year, we won the Champions League and the Premier League, and we won them in great style,” said. “But to talk of a great team, you need six or seven consecutive years of dominance. This side is good enough to do that, because all our young players can improve. Basically, I think this year we have the best United team ever.”

Giggs emphasises the point that whilst any trophy will be welcomed, the defence of the Premiership always takes priority.

“With United, the goal is to win a third consecutive Premier League title,” he added. “In the Champions League, we already realise it will be extra hard to protect our crown, as all our rivals would love to knock out the holders of the trophy. At the moment, the title race comes first, because it’s the domestic league. It’s the ultimate test. To finish top after 38 games is amazing. Then comes the Champions League. But in every competition, many different factors come into play: taking your chances, coming into form at the right time and having a bit of luck. All title challengers benefit from luck in a season. But in the end, only one team can claim the trophy.”

Is this our best team ever?