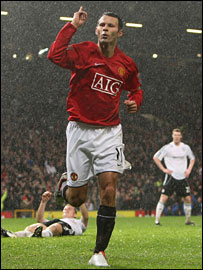 Ryan Giggs made his 100th Champions League appearance last night against Lyon, making him one on only eight players who have ever done so. His name now goes along the name of European greats, Raul, Oliver Kahn, Clarence Seedorf, David Beckham, Paolo Maldini, Roberto Carlos and Luis Figo, who also have the magnificent achievement under their belts.

With Giggs joining United’s very own 100 club, becoming the 11th player to ever score 100 league goals for the club earlier this season, scoring against Derby, he is also closing in on Sir Bobby Charlton’s record appearances for the club. It seems as though he is planning for his life after playing football, the FAW technical director confirming today that Giggs has enquired about studying Uefa ‘A’ Coaching Licence.

It is looking like Giggs will start studying for his coaching licence at the end of this season, although no plans have been made to finish his playing career just yet. “Ryan has indicated he wants to come and do his Uefa ‘A’ Licence with us in Aberystwyth in June,” Osian Roberts, the FAW technical director, said. “It’s great news for us in Wales and I think it’s also great news for football that someone of his calibre and status will stay in the game. With all his experience and expertise he’s going to be a great and valued member to football in the future.”

Will Giggsy cut it as a coach?