Good News For Portsmouth Whilst We'll Struggle To Pick A Team 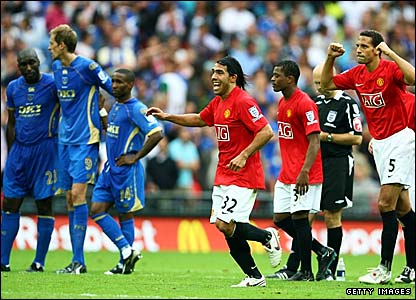 We’ll be kidding ourselves if we think Portsmouth will roll over for us like they did against Chelsea at the weekend. As we saw in the Community Shield, Pompey are up for a ruck when playing against United, rugby tackles and all!

Sky Sports have just delivered some good news to our next opponents: Portsmouth have been handed a boost ahead of their meeting with Manchester United following the news that four pre-season injury victims have returned to training. Sean Davis, Richard Hughes, Glen Little and Noe Pamarot are all back in action after recovering from knocks and could feature at Fratton Park on Monday.

Unfortunately, our news is quite the opposite.

We will struggle to put a team together for our trip to Fratton Park, with Giggs and Carrick limping off during our match against Newcastle at the weekend.

This means we have no wingers available and are scraping the barrel when it comes to other midfielders. We are going to have to shift our players around to even field an XI.

Patrice Evra on the left wing (as he was forced to against Newcastle) and Darren Fletcher on the right, with Scholes and John O’Shea in the middle. This means we’ll either bring Mikael Silvestre in at left back (although unlikely if we’re trying to sell him off, for fear of injury) or one of the Da Silva lads. Equally as importantly, we don’t have the options on the bench. Whilst I’m happy enough to see the likes of Rodrigo Possebon getting a go, but chances of him changing a game around, in the way other players would when they’re available would, are pretty slim.

Currently, only West Ham have more injuries than United with Portsmouth expecting a fully fit squad ahead of our match. Injuries are of course a part of the game though, so we’re just going to have to grit our teeth and get on with it.

The only positive to come is that Carlos Tevez will be playing, following a return to Argentina after the death of a family member.

Of course, I’ll remain hopeful until the last, but it’s looking as though we could be in for another tricky start this season, dropping points we can’t really afford to.