History To Repeat Itself? April 7th 2007 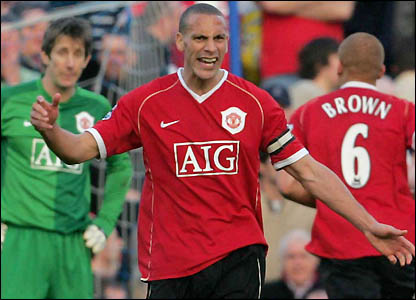 It was just “one of those days”. Manchester United saw their six point lead at the top of the table cut to three after losing to Portsmouth on April 7th 2007. We had travelled to Roma for the European Cup quarter final midweek, Rooney scoring what was thought to be a crucial away goal, but now had to focus our attentions firmly on the league.

Chelsea had beaten Spurs earlier that day and the pressure was on United. Despite winning our past seven games in the league, with the injuries to Nemanja Vidic and Gary Neville at the back, United were set to struggle.

Matt Taylor opened the scoring for Portsmouth with half an hour played, after Kieran Richardson lost possession just outside the box. Benjani had a go from range, with Van der Sar only blocking the shot in to the path of Taylor, who slotted the ball in to the back of the net. United had just about got a control of the game at this point, with Ronaldo breaking down the Pompey defence moments earlier, only to see his shot go wide of David James’ post. United responded well though, they certainly weren’t going to give up now, and continued to press forward. James had one of his games of the season though, of course, keeping out shots from Ronaldo and Solskjaer, before Lauren cleared a change off the line. James got his finger tips to a great effort from Giggsy, and denied Brown a headered goal.

Time was running out and United continued to throw all their men forward, desperate for at least a point to give more breathing room between us and Chelsea. Taylor picked up the ball just inside United’s half and played a tame ball through, intended for LuaLua. Ferdinand was easily first to the ball though, passing back to the keeper before looking up. Had he looked up, he would have seen Van der Sar, who for some reason was charging off his line. He didn’t though and the ball rolled painfully over the line. John O’Shea claimed what would have been, if not for the own goal, a thoroughly celebrated equaliser a minute later.

“These things happen,” said Fergie after the game. “It has come at a bad time but we have showed character all season and must do so again now.”

These were nerve-racking times for United fans. The confidence we felt in the 90’s and early 2000’s were a distant memory, after seeing our team let themselves down time and again. Only the season before we’d seen United crushed 4-1 by Boro and knocked out of the European Cup at the group stages. This wasn’t the United we’d known of years gone by, and despite leading the table throughout the 2006-2007 season, our self-assured attitude was yet to fully return. We all knew United were capable of screwing it up, so to lose a game courtesy of an own goal with six games left to play, one of those a trip to Stamford Bridge, left us feeling in doubt.

Still, there wasn’t much time to dwell on this result, as the second leg of the European Cup quarter final followed three days later.

After losing the away leg, but scoring an away goal, there was everything to play for. With Neville and Vidic still out and Totti talking up Roma’s chances, we knew our players had to forget the disappointment of Portsmouth and play for their lives.

Not a lot more needs to be said about that game though, with every superlative imaginable coming out of my mouth at the time, following our incredible 7-1 win over the second best team in Italy. But with that result, United turned their season around. We won our next game, as did Chelsea, then drew the following match, as did Chelsea, keeping the points difference to three points. There were four games remaining, with our trip to Stamford Bridge falling on the penultamate match of the season.

United went 2-0 down to Everton away from home in the next league game, whilst Chelsea stood 2-1 in front at home to Bolton. If the scorelines remained this way then United would remain at the top of the table only on slim goal difference. However, Bolton made it 2-2 four minutes after we conceded our second, only for United to go on to score four goals with less than half an hour until full time.

The Stamford Bridge game was rendered worthless after our win on derby day was followed with a 1-1 draw for Chelsea away to Arsenal, and our second string received a Guard of Honour from last season’s Champions.

A year later, April 7th 2008, and United find themselves in a strangely similar situation. In the week just gone, we returned from Rome after a quarter final European Cup game. However, this time around, we won the game 2-0 rather than losing 2-1. At the weekend, we dropped points against Middlesbrough, cutting our lead to the top of the table to three points, just as our loss to Portsmouth a year ago did. However, this time around, we drew the game in question and our goal difference is considerably superior to Chelsea’s, scoring 70 goals to Chelsea’s 58, with an overall 18 goal advantage.

The second leg game against Roma is played on Wednesday, which is a game you would have to fancy United to win. This is followed by tricky games against Arsenal and away to Blackburn, before travelling to Stamford Bridge to face Chelsea, which unlike last season, could have a significant say in who is crowned Champions this season.

Do you think history will repeat itself, with United gaining entry to the semi-finals after beating Roma, then going on to increase our three point advantage to win the league?