How Could We Have Missed Rooney's Arrogance? 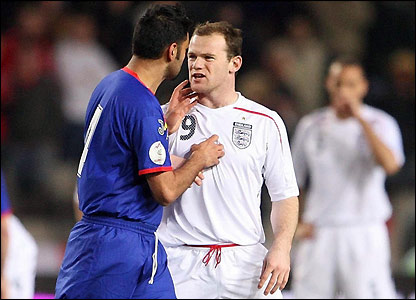 Wayne Rooney has been accused of many things, the latest of which, “arrogant”. Andorra midfield, Oscar Sonejee, obviously wants to make a name for himself. Maybe the salesman by day isn’t make enough commission, so he thought he’d get a name for himself as the man slagging off Rooney.

Asked if Rooney swore at him, he said: “Yes, Rooney did. We were talking and he said ‘I’m a star player’ and insulted me. So I insulted him. In his mind he was thinking: ‘Who are Andorra? They have small players and are not professional.’ Rooney was arrogant. The match was a very hot situation and, when Rooney talks, he’s very aggressive. It was a battle. There was a moment when the game was on the other side of the pitch and he just pushed me.”

Whilst there are several criticisms of Rooney I can agree with, particularly to do with his swearing, which I fully believe he was guilty of in the direction of Sonejee, to call him arrogant is not something that sits right with me. There are other United players I feel could rightly be named arrogant, but Rooney is not one of them. He is one of our most grounded players, which is pretty remarkable when you consider his talent and the young age he emerged on the World stage.

But has Rooney proved Sonejee right with his comments ahead of England’s game today?

“I think especially as we didn’t qualify for the Euros, it’s a massive game for us now,” he said. “We want to start off the campaign well and get the three points. We know from last time we played them it will be a fairly tough game – we had to work quite hard for the victory. We understand it’s going to be a tough game but we want to go out there and put a good performance on. We let ourselves down – we let the country down – by not qualifying for the Euros. There’s been things saying the players don’t care: us players are proud and privileged to play for our country and we will give the best we can.”

Rooney’s admittance that Andorra (ranked 186th in the World) gave England a “fairly tough game” are not the comments of an arrogant man. The fact Rooney acknowledges England’s poor showing of late shows that he is not a man with his head stuck up his own arse.

So, as if we needed any confirmation, it’s clear Rooney is not the arrogant footballer Sonejee paints him as.