How Did United Do On International Duty? 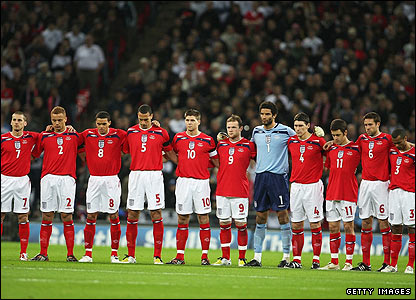 On a day that saw United mourn the eight lives lost 50 years after the Munich Air Disaster, International games were played across the globe with several of our lads representing their countries.

Wayne Rooney, Rio Ferdinand and Wes Brown all started for England, the most we’ve had starting for the country for some time. Rooney had a poor first half, but more than made up for that with a lively second half, being named as John Motson’s Man of the Match. Rio Ferdinand was his usual reliable self, despite being held accountable by some for Switzerland’s goal, although that would be a harsh account. Wes Brown had a bit of a shocker, like he usually does for England, displacing Micah Richards from the position he has been playing since the injury for Gary Neville. Owen Hargreaves came on with 20 minutes to play. England won 2-1.

Cristiano Ronaldo started for Portugal against Italy, suffering a rare defeat for his country. Toni and Pirlo were on the scoresheet for Italy, before Quaresma seemingly put Portugal back in the game. However, Quagliarella killed it off, scoring Italy’s third of the evening. Name sound familiar? Yes, he’s the striker we were linked with in the summer. Nani came on at half time. Italy 3 – 1 Portugal

John O’Shea had a good game for the Republic of Ireland in the centre of the defence against Brazil. He was on the losing side however, thanks to a good goal from Real Madrid’s Robinho. Anderson got a ten minute run out. Ireland 0 – 1 Brazil.

Nemanja Vidic played in Serbia’s 1-1 draw with Macedonia, with his side conceding thanks to a goalkeeping error.

Jonny Evans was the only red to get his name on the scoresheet, unfortunately for him, for the wrong team, as he deflected a cross from City’s Petrov’s boot, in to the back of his own net. Northern Ireland 0 – 1 Bulgaria.

France lost 1-0 to Spain with Patrice Evra failing to get from the subs bench.