How John Terry Attempts To Belittle Rio For Captaincy... 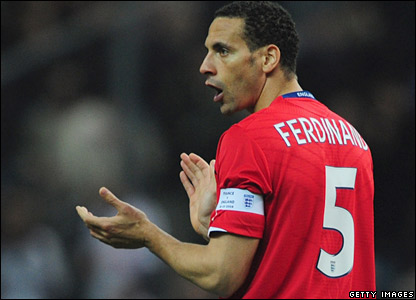 There has been a lot said about Fabio Capello’s decision to make Rio Ferdinand temporary captain of England in the press this week. Some questioned how appropriate it was to make Ferdinand captain when taking in to consideration his less than glowing past. Others recognised the change in Ferdinand and his commitment to being a good role model.

Before the game, The Guardian wrote in praise of Ferdinand, hailing him as the best in the country for his position. “There is a new maturity to Ferdinand, which has been reflected in his performances this season. He has been the Premier League’s best centre-half, a key member of a defence that has conceded only 15 league goals.” The Telegraph reflected on Ferdinand’s past, whilst hailing the change in him. “There was a time, about four years ago, when the thought of Ferdinand captaining England would have appeared absurd. He had, after all, just been given an eight-month ban from all football by the Football Association for failing to undergo a routine drugs test. His private life had long been of interest to the more salacious side of Fleet Street and to think of him as leadership material, even for his club, let alone his country, appeared not even a subject for conversation. When attempting to defend their player, Manchester United pointed out that Ferdinand was ‘forgetful’ and hinted that at times he was a bit dim. However, since his return, against Liverpool in September 2004, his maturity has been self-evident on the pitch and in the passion with which he has taken to campaigning for sporting opportunities and against knife crime in the estates where he grew up. His articulacy and honesty are refreshing in a world where so many comments are deliberately banal, although it is his performances on a football field that would have most interested Capello.”

After being named captain, Ferdinand was modest and self-deprecating, whilst genuinely happy and honoured. “It is a fantastic honour and an achievement in itself to be named England captain,” he said. “As a kid you grow up wanting to play for England and to lead your country and I now have been given the honour to fulfil these dreams, so definitely I am very happy.”

Now, the France vs England game was nothing to write home about, with neither side covering themselves in glory. The game was boring and a penalty to France, courtesy of Calamity James striking again, was all that separated the sides, after Anelka easily beat John Terry for pace, bursting in to the box.

Ferdinand walked out proudly and put in a solid performance. Before the game, The Independent claimed it was Ferdinand’s captaincy to lose now, and I believe that still to be the case.

However, John Terry isn’t about to surrender the armband without a fight, and in an interview with ICON magazine, showed himself up as arrogant and disrespectful. Ahmed at Soccerlens.com addressed this same point, labelling the Chelsea captain “self-minded and self-centred.”

There is nothing wrong with Terry fighting his corner, highlighting reasons why he thinks he should be captain, but does he really need to do that at the detriment of colleague and friend, Rio Ferdinand, as well as every other potential captain?

“I do set an example in the way I play,” Terry claimed, although what example he thinks he sets I’m not too sure. “If they don’t want an England captain fighting for England in every way possible, fighting to win the ball and come out of the tackle, fighting for the cause, then that’s down to them to make that decision.” Does Mr Terry honestly believe he’s the only player in the England set up who fights for England? That if they don’t choose him, they are choosing a captain who isn’t fighting for England’s cause in every way possible? What is this statement saying about Ferdinand and co.?

It begs the question, where was John Terry, the fighter, the warrior, the captain who’s desperate to win, when England failed to qualify for Euro 2008? He was the captain when England played out that goalless draw at home to Macedonia, a game which if they had won, would have secured their qualification. He was the captain when England played out another goalless draw against Russia a couple of months later. But he’s let off the hook, as he was injured for the crucial defeat against Croatia. However, let’s not forget that he was “injured” for England that evening, but managed a full 90 minutes for Chelsea in the league just three days later. Now don’t get me wrong, I am certainly a club > country man, but then, I’m not trying to prove I should be made captain of England.

He bailed out on England when they needed him most. When they needed a leader, a fighter, Terry preferred to rest up so he could give his all at the weekend in a league game for his Chelsea. Terry knew if he pulled out of that game, the best available back four, due to injuries and suspensions, would be Richards, Campbell, Lescott and Bridge. Still, he chose to leave them to it, and it was the defensive errors in that game which cost England a place in Euro 2008. But at least John Terry could play a full 90 minutes for Chelsea in a game where he would obviously be needed…against the mighty Derby County!

In the final blow, of demeaning his team mates and arse licking the manager, he says, “I am really passionate about it. It means so much to me, to my family. Mr Capello is a clever man and a great manager and he’ll give it to the right person.” I’m pretty sure that it is Capello’s intelligence which will help him to see right through the pathetic and insulting plea from Terry.

Ahmed correctly identifies this interview with Terry as something which has every potential to create divides within the camp. Ferdinand was on a high at being named captain, and to hear such self-centred talk from Terry will have no doubt been deflating. Of course, it’s a sort of competition for captaincy, and they both want it, but we haven’t heard Rio Ferdinand hailing himself as the only right choice. In fact, it was quite the opposite, him looking at the importance of all players on the field. “You need to play as a leader whether your captain or not,” he said. “It is important to have 11 guys who want to lead and want to lead on the pitch and have the balls to put their chest out and lead from the forefront.” Ferdinand graciously went on praise the other potential candidates, claiming “there will be no animosity between the players, we are all mature enough and professional enough to go by what the manger says. Steven Gerrard was captain last game, I am this time and if the manager wanted someone else next time then we will see.” Ferdinand obviously said this before reading Terry’s immature, self-serving interview!

What do you think of Terry’s comments about the England captaincy?