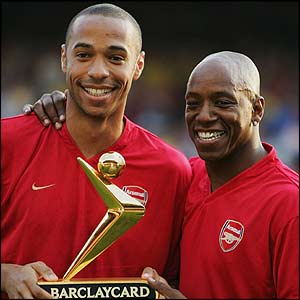 Rumours linking Thierry Henry to Manchester United have been circulating for some time now, which have been perpetuated with Sir Alex Ferguson’s recent admission that he couldn’t rule a bid for the striker out, saying, “I can’t answer it because I’ve not got a direct answer.”

I have already made my feelings on the matter rather clear, I don’t want Henry anywhere near United, unless he’s playing for the opposition and losing (like in the European Cup semi-finals last season). However, another Arsenal hero, Ian Wright, seems rather fond of the French forward joining us, claiming that Henry doesn’t love Arsenal enough to be loyal and keep his word to his former club. Is he right?

“At one point it crossed my mind to leave,” Henry said in May 2006. “But I think with my heart and my heart told me to stay. I’ve never played in Spain and never will. This is my last contract.”

Just a year later though, Henry was smiling for the cameras in his new Barcelona shirt. “I always said that if I ever left Arsenal it would be to play for Barcelona. That is no disrespect to anybody,” he claimed. “I saw the club from outside and loved to watch them. I hope to be part of a football I love to watch, a beautiful game. It is a well-structured club, extraordinary. I will put the club before myself. The most important thing is Barcelona.”

However, as the Gunners wiped the tears from their eyes, they were provided with some comfort. At least he wouldn’t play for any other English club. This is a point he has reinforced time and again when he has been linked with a return to the Premiership.

So, should Arsenal fans believe that now? If an offer came in for him from Sir Alex Ferguson, would Henry turn it down because of a promise he made to Arsenal? Ian Wright doesn’t seem to think so, claiming that Henry probably doesn’t have the same feelings of love and loyalty towards Arsenal as players like David Beckham have towards Manchester United.

“I wouldn’t blame him if he went to play under Alex Ferguson,” Ian Wright said in his column in The Sun.

What right has anyone to stand in his way if there is a move to Old Trafford on offer? After all, he’s no David Beckham. When Becks left England for Real Madrid he said he’d never play for another Premier League club other than his beloved United — and he was as good as his word. After his Spanish adventure, even with the likes of Newcastle and Arsenal sniffing around, he joined a side halfway across the world no one had even heard of rather than come back here. It proved just how much he loves United.

There’s no doubt Henry loves the Gunners. The club and Wenger made him what he is today. But I just don’t know if he has the same affection for the club as Becks has for United.

Thierry, who turns 31 on Sunday, still has bags to offer and only a few years left to show it. For one reason or another, he hasn’t had the kind of success at Barcelona he’d have probably hoped for. If he is out for one last move, then he will want to come back to England where everyone loves him and he can be the main man again. Other than Arsenal, there’s only one team for a player of that calibre — and that’s United.

Wright then goes on to look at United’s other options, suggesting Dimitar Berbatov would be a better option Henry because of his age.

The only other attacking player United would probably be interested in is Lionel Messi — although I don’t think Barca would sell. That’s what I love about Alex Ferguson, though. All these trophies and he still wants to sign the best in the world.

Whilst I find it fairly amusing to see an Arsenal legend speaking so highly of United and our manager, I can’t agree than Henry coming to United would be a good thing for our club. The guy is past it and whilst his form at Barcelona isn’t necessarily a true reflection of his ability, we’re building a club for the future, and shouldn’t be plugging the gaps with players who peaked years ago. Even Arsene Wenger wouldn’t want Henry anymore, so why on earth would we? Wright is spot on, Fergie does want to sign the best in the World, but Henry is nowhere near that calibre of player anymore.