A header from Van Dijk after 15 mins and Salah finishing off proceedings in the last seconds. It was a game where the pendulum swung between either side but the Red Devils cannot count themselves unlucky on this occasion

Much has been made of the defensive side making up for Wan Bissaka’s ailing offensive attributes but today, even that was out of sorts. Perhaps the tactic of Solskjaer didn’t help him as the full backs, slash wing backs, were given the order to go up and press against the Liverpool full backs but doing so in positions that came from far too deep. It gave them advantage, particularly Robertson, as Wan Bissaka has this strange idiosyncrasy of ambling into 1v1 duels rather than sprinting across to close down his marker. His great recovery serves him well but today, when it was just easy to pass it round him, you saw for the first time that there are actually defensive facets of his game that need sharpening in order to cement himself as a top level RB. He was helped by the tweedle dee and tweedle dum’s of today’s match in Lindelof and James giving him far too much work with either the Swede’s poor positioning making it so that the English U21 international needed to worry about the threat of Mane on the cover or the Welsh winger stupidly pressing up the field, opening up avenues down the right hand side. Unfairly though, we come to expect Wan Bissaka to deal with the threat once they reached him but probably for the first time this season, he created defensive issues of their own.

There is a quote of Ferguson explaining that his mark of a player, and whether they would ever don the strips of United, was if he thought they could come through a game at Anfield on the other side with an admirable performance. The Brazilian international today showed that today, particularly in the second half. After 10 mins, Liverpool had been all over us and we needed composure in order to get up the pitch, which Fred was able to gather and transmit throughout the team. He turned on the ball at the right times, harried and harassed the Liverpool midfield, more often than not picked the correct passes, turning down ample opportunities to get the ball forward at times. It was something that helped stage the late furore Ole’s United as Liverpool dropped deeper. Matic alongside him did this to in some regard and they were often let down by poor decision making in the final third that let down all their play.

If there is ever a game to change your formation to one that shifts based on game scenarios, it would probably be the one against the run away leaders who had not lost a game all season. Alas, Solskjaer decided a 4-2-3-1/5-2-1-2 would be the way to go of it. The problems began when the ball was switched with speed – it led to the corner for the first goal. The Mane chance at the end of the first half where Wan Bissaka was caught up the field was also a consequence of it. He was playing as a RWB and Lindelof as a CB but no RCB in between. By the second half, the team seemed to manage to get to grips with it, playing into the channels the Liverpool FBs leave initially and then passing in field to the free man once the Liverpool CMs have been drawn across to cover for their flying full backs. The lack of clarity however perhaps wasn’t what was needed on the day, especially in such a naive, weak team mentally and shoddy on the ball, as they constantly gave the ball away in transition, hindering our ability to change into the different shapes. The continued want to play from the back before Liverpool tired was another ghastly decision on the coaching staff’s part. 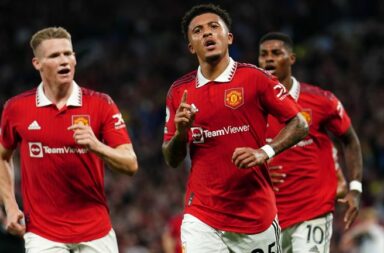