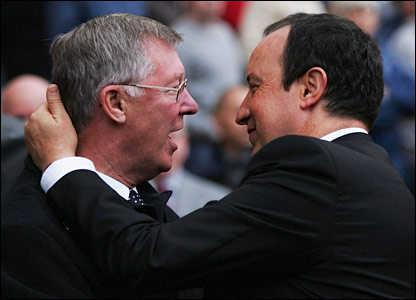 50 years ago today, Sir Alex Ferguson was a wee 16-year-old lad, ready to make his debut in professional football for Queen’s Park. He has come a long way since then, winning thirteen League titles in England and Scotland, six European trophies, five FA Cups, two League Cups, as well as a further five trophies in Scotland.

Rio Ferdinand isn’t the only one to heap on the praise, we’ve seen a striking U-turn from ABU Oliver Holt, as well as several managers in the Premiership offering up their high opinion of our manager.

“When I was trying to make my way in management in Spain, I wanted to learn as much as possible, so I decided to spend some time in England, to see how things were done over here,” said Liverpool manager, Rafael Benitez. “There was only one place to visit, and I was thrilled when Sir Alex said I would be welcome at Manchester United’s training ground. I spent a week there, watching him and Steve McClaren working with the players, and I saw a game at Old Trafford as well. It was an unforgettable experience, and you could say he played a part in my development as a manager. He really is an amazing man.”

“Sir Alex’s contribution for football not only in England, but in the world, is huge,” said Scolari. “He is a man with passion who loves his job, loves football. I want, in my life, to follow this man and his story. Many coaches in the world when they look and read about Alex, they admire him. He is an inspiration and a man who is a mentor for others.”

Ferguson’s new best mate, Arsene Wenger, has also commented on the achievement of our manager.

“Fifty years is an unbelievable achievement and there is a massive passion behind that,” said Wenger. “In his case it is a massive achievement because for most of those years he has been under pressure at the top, top level.”

Martin O’Neil, who some reds fancy to replace Fergie in a couple of seasons, puts our manager up there as one of the greatest ever.

“To manage any club and stay there for such a long period of time is remarkable,” he said. “To do that at Manchester United where the expectations and the ability to come up to those expectations is constantly questioned is, quite simply, phenomenal. He is one of the best managers of all-time. Unquestionably.”