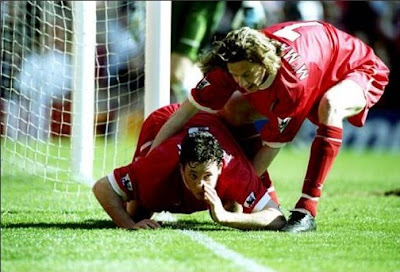 Robbie Fowler is the latest ratmuncher to make a twat out of himself.

“I know people are saying it’s all over for my old team now and I even heard that the United manager was saying Liverpool are out of the title race because of the Chelsea result,” Fowler said. “But I disagree and I think in a strange way it can help them because they will be able to concentrate every single ounce of their energy and concentration on winning the league.”

Before their game Ferguson said the team that would pose the biggest threat to us would be the team who progressed to the semis out the Chelsea vs Liverpool tie.

Fowler, who clearly has been speaking to Liverpool’s barmy manager, has interpreted this to mean that Fergie has now ruled Liverpool out of the title race because they have lost the first leg of the Champions League tie.

Are they all fucking backward over there or what?