Manchester United held Liverpool to a goalless draw at Old Trafford on Sunday leaving the Red Devils 5th on the league log behind Arsenal. Contributing writer, Nathan Quao, observed the game and notes down a few pointers.

When your top choice defensive midfielder misses your biggest grudge match through injury and you are forced to make three changes in the first 45 minutes, you may have not right to survive the match especially when it is against top opposition.

However, Man United did hold on to get a point and they could have won the game actually had Matip’s own goal not been chalked off for offside by Chris Smalling and had Smalling gambled a bit more with a Romelu Lukaku cross late in the game.

It took a lot to get the draw on the day and the plaudits will have to go to the players for their willingness to give everything and the technical team for the guidance and the ability to manage the team without any changes in the second half.

Of course, had Liverpool played at a higher and more ruthless tempo, the story could have been different but that was not the case and the Red Devils will take the point and call it a day.

When all the emotion of the day dies down, there is a huge problem in terms of squad depth and quality to be solved at Manchester United.

Followers of the club may talk of opportunities to fringe players and young English players and all that but the hard and painful is that Scott McTominay cannot be the one Man United falls back on when Matic is out injured.

There should be a better replacement for such situations and all business in the summer should be aimed at refreshing the team with great cover for key positions.

It is the reason why teams like Man City and PSG are as good as they are. They have numbers who can come in and fill gaps almost seamlessly.

Manchester United need to think long and hard about this because there will be lean times like these when players fall by the way side due to injuries and proper changes will have to be made.

McTominay and co may have given a great effort against Liverpool but on another day, they will be found wanting.

One test out of the way and more remain. The team will have to move on and get back to winning ways because the hunt for Champions League football is still very much on.

Matches against Crystal Palace, Southampton, and Arsenal are next and there is the need to get points on the board.

Players will have to step up and deliver and the manager must show great skill in handling the injury situation while putting out teams that can win games.

Solksjaer may have done a lot until now but there is a lot more to do if he still has dreams of being named permanent manager. This phase of dealing with tough games and player unavailability is another test and he has to pass it well because success in the present will mean the manager’s seat in the future.

He will have to choose his destiny.

Special mention to Luke Shaw. The 92 minutes against Liverpool were arguably, his best defensive display for the club and he kept Mohammed Salah quiet all afternoon. Not a lot of defenders have done so successfully but Shaw did and he did not have to be aggressive. He was smart and he provided a good outlet on the offensive. 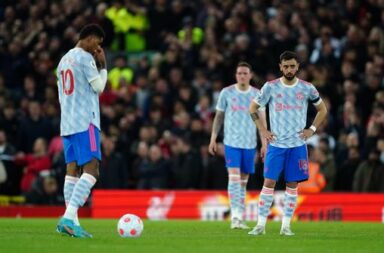