Manchester United battled with Chelsea and the outcome was a 1-1 draw at Old Trafford on Sunday. Juan Mata put the home side ahead but Marcos Alonso reacted well to David De Gea’s spillage of a shot to tie the score. Contributing writer, Nathan Quao, saw the game and has penned his observations.

Another good show but not enough reward

The main talking point of the game was whether the Red Devils would be able to find another good performance and possibly top it up with a victory. After the turn of events in the games against Everton and Man City, a lot was expected of the team and for a good part of the first half, it looked like it would happen.

The effort was visible and the players had the looks of a group that wanted a win. There was hunger and there was good execution. Having Ander Herrera also helped as it gave Paul Pogba the chance to do more in attack as many would want it in the idea situation.

The fans also turned up and gave the necessary noise and atmosphere. Juan Mata got the team going and it appeared fine.

However, things could get back to the same levels after the Chelsea equaliser and in the second half. There was a sense of apprehension and it took a long time for a sense of freedom to be seen. Maybe the drop in levels made the difference because when there was a sort of recovery, the tide had gone away from the team.

There were not a lot of errors or mistakes or periods of ineptitude. It was rather a day when not enough momentum was gathered for a good return. Usually, Man United’s Spaniard in goal is very reliable. He makes great saves and that wins points for the unit. However, in the last few weeks, he has looked jittery and unsure and it showed again when Chelsea came to town. An analysis of the sequence would show culpability on the side of the midfielders and defence that allowed Antonio Rudiger to shoot from distance.

However, the bigger blame would have to fall on De Gea. Could he have done better with the shot? Was it so powerful that he could not save it one time or punch it away from the action?

He could not get it right and Marcos Alonso was there to score. The goal changed a lot of things and perhaps, even caused Man United to struggle for rhythm again.

But De Gea’s form is a concern. He has not looked strong enough and even though, he will need the support of the manager to get through this, there needs to be an examination of why the errors are occurring more often.

Contract talks? Tiredness? A poor defensive shield? Poor form? There are so many possibilities but Man United would like to see the old, more assured, David De Gea back in post.

The game represented the final charge for Champions League football for next season and the needed result was not attained in the end.

Now, there has to be a strong admission that playing among Europe’s elite next season will not happen.

Some will preach mathematics and the possibility of a results going Man United’s way but realistically, not beating Chelsea was huge negative in the story.

Will it make the rebuilding of the squad more difficult? Maybe, maybe not but Ole Gunnar Solskajer does not have the Champions League card to throw at his targets anymore and that complicates the task greatly for the manager in the transfer window.

On to the next game but a great chance has been lost.

Special mention to Ole Gunnar Solsjaer for at least trying to get things to change in the second half with the Alexis Sanchez switch for Marcus Rashford. Very often under the Norwegian, the trend has been to keep Rashford at all costs but it seems the Englishman was so below par that the manager could not have kept him in the game.

The change may not not have worked but the principle must be applauded.

Luke Shaw also deserves a huge shout for his good work defensively and offensively. He managed to create a goal but more importantly, he was alive in the final stages when the Chelsea counter attack was a very strong threat. 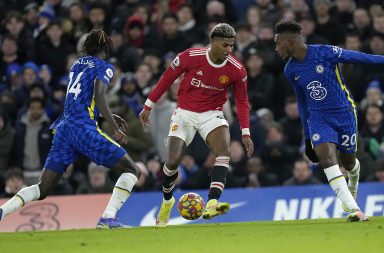