After a long international break, Manchester United returned to Premier League action and got themselves a 2-0 home win against Swansea City thanks to goals from Romelu Lukaku and Alexis Sanchez.

For once this season, the Red Devils were up for the match from the blast of the whistle and that set up the result on the day.

Too many times this season, the team has struggled to get out of the blocks rendering the rest of the match very tedious.

At times, there have been recoveries and on other occasions, the loss has been served but today, there was eagerness and drive to get an opening and take control of the match.

The passing was good and the pressure that this team should put on beatable foes was very present leading to the first goal after five minutes from Romelu Lukaku.

The cycle continued and on 20 minutes, a second was added by Alexis Sanchez.

Whether it was by accident or by design, the second half display from the team did not have as much zip and bit but the damage had already been done and the points were taken by the Red Devils.

With the final part of the season in motion, getting things right from the start of a match is what will make the target of reaching second place a reality.

Teams may not be as manageable as Swansea but the main key is to get off on a good note in order to make winning matches far easier than in previous parts of the season.

Scoring 100 goals at any level of football cannot be glossed over and for Romelu Lukaku, reaching a century of Premier League strikes at age 24 years is a huge deal and he has done so playing for a wide range of clubs from Chelsea through West Brom, Everton and now Manchester United.

At a point, it did not look likely. He went through bad patches this season, his confidence looked shot and he was the target of a lot of criticisms.

But the Belgian big man has fought hard and he has largely found his feet.

He has earned his praise and in the last few weeks, he has looked like a man willing to fight and ready to urge his team-mates on to do big things.

For his 100th goal, he had to control with his right and finish with the left. Routine it looked but it was very important in setting the team up for the 2-0 win against Swansea.

Here is to another 100 Premier League goals for Lukaku and may the next century come as a Red Devil.

It may have only been against Swansea but Paul Pogba and Alexis Sanchez looked up for it.

They buzzed around well and especially for Pogba, he showed ease on the ball and was able to pick passes from deep for his team-mates.

One such pass was wasted by Juan Mata in the second half after he hit a volley hard over the bar when subtlety was the better option.

The Frenchman has endured a difficult spell highlighted by talk of a falling out with the manager, Jose Mourinho but his output will delight the gaffer and the fans.

Sanchez got a goal but he looked generally better than in previous matches. Of course, he is still way short of the level he produced at Arsenal but hopefully, he will get back to hose heights.

There are things the Chilean will have to do better. His decisions need to be sharper and he must be more aware of his team-mates and the situations and act quicker than he is doing now.

The two players are key to whatever success will enjoy this season and in the future and so, they will have to be at their very best so everyone wins. 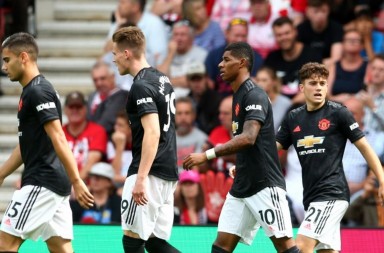