Manchester United limped over the line at Old Trafford with a 2-1 win over Watford. Goals from Marcus Rashford and Anthony Martial settled the tie. Contributing writer, Nathan Quao, observed the game and has noted a few things.

Was it the international break? Was it Watford’s energy? Whatever it was, Manchester United were very below par on the day despite the victory.

The goals from Rashford and Martial were the punctuation marks in a story that saw Watford dominate the match. The tempo was absent and there was not enough determination on the field. Players were too slow in going for the tackles and there was no competition from the Red Devils.

The saving grace was that Watford were blunt until the 91st minute and it was too late for them.

In the week that Solksjaer’s future was sorted, a better performance was needed from the team. However, escaping with victory always provides a good setting for some reflection to be done ahead of the rest of the season.

Despite the poor play from the team, Luke Shaw and Chris Smalling can say that they earned their wages on the day.

For Shaw, the assist for Rashford’s goal will be seen as the highlight of his day but he put in the shift when it came to his defensive duties. He was ready for whoever came at him and he always called the right numbers when he had to either tackle or shield the ball or get the clearance in.

After the initial hiccups in handling Troy Deeney, Smalling woke up and was alert for the rest of the tie. A defensive header close to the end of the first half from a Watford free kick got him going and he was available to get the crosses away as the game wore on. There was some concern leading into the game in terms of how he would fare against a very tough Deeney but Smalling showed what he could do. Of course, there were moments when his passing was not the best and it compounded the issues United had in the first half.

When Solksjaer addresses the team on this game, he has to give a good thumbs up to Shaw and Smalling. Maybe that will shake the others up to give their best when they head to Wolves on Tuesday.

An Odd Game at Old Trafford

Despite the negatives and the off-colour showing, Manchester United won on the day and they did not have to play well. That is the oddity of the game that is loved by all.

Better performances have been given off by the team and sometimes, the result that seemed deserved did not come. A great example is the league game at Arsenal from a few weeks ago.

Winning after a poor outing is important to Man United for two reasons:

-It takes away the bitter taste of defeat to Arsenal for the players especially and the manager.

-It reminds the team to play better because they actually can turn it on and score great marks in matches.

With Wolves on the horizon and the rest of the season coming into sharp focus, there needs to be a strong reminder that better days are ahead and the chase for top four football is still on.

There are few more twists in the plot but United will have to be ready for those moments when they come.

On to the next one! 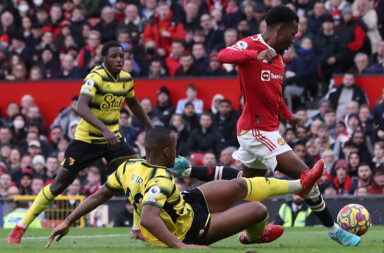