It was more of the same from Thursday night as United huffed and puffed. The only difference is that rather that the team being level when they should have been ahead, they were lucky to be level. Joelinton hit the woodwork in succession when he really should have scored. The Magpies made much of the running in the first half and it was quite poor from the Red Devils. It was reversed in the second half as Ronaldo had two goals cancelled, two penalty shouts were denied and towards the end, Fred and Rashford missed glorious chances to grab all three points. In the end, it ended in a tie and given both teams had the better in each half, it was probably the best result.

When the signing of Eriksen was rumoured and then confirmed, many thought he was there to add depth to the squad that was lost with the amount of midfield players that left in the summer. Instead, we have seen that he is a cornerstone of the Ten Hag’s preferred XI. Maybe the lack of Frenkie De Jong has forced his hand. Regardless, the Dane has taken a spot in the team that many wouldn’t have expected him to have taken.

The main downfall of that inclusion has been Fred. During pre season, he didn’t look like that would be the case but it is. Today he had his chance as Eriksen fell foul to illness so wasn’t in the 20 man squad. If that performance is anything to go by, the medical team will be dosing Eriksen with as much Night Nurse as possible. Fred’s first significant stint in the XI came when Pogba suffered a bad injury that would basically keep him out for the first 2/3s of the season. It was then that he struck up the McFred partnership and then played alongside Matic. Beforehand, in his inaugural season, he was in and out the team, trying to adapt to the plights that the Premier League can bring.

Fred on his better days will give you inconsistencies so when he is having to build up match rhythm, it can be quite the sight for sore eyes. Troy Deeney is very vocal in the tactics Watford would employ on Fred because they know he hardly ever plays one touch, due to the erraticism in his technical ability. Newcastle looked like they played into that same tactic. Their press, not just on the ex-Shakhtar man, was coordinated and effervescent. Even taking that into account, Fred, in the first half especially, was an absolute joke. Not only was he lucky to come out at half time, no one would have been complaining if the board went up during the first half and his number was in red. His touches were amateurish, his passing was comical and his positioning compromised the shape of the team so badly.

Much of the Brazilian’s worth comes from the fact he can make a lot of tackles, interceptions and duels but he likes to do so while on the move and with momentum. But he does so at every chance, even when there is no need. It leaves his partner, this time Casemiro, trying to cover space that is just impossible for any player to do. Yet even if he were to win it higher up, his quality is lacking in terms of progression and offensive ability. The best chance at the end of the game shows how out of sorts he is. Fred clearly isn’t good enough to start for United but that’s not the only way to be a worthy player. The fact he looks so bad when having to come in for certain games, which is what someone of his prowess should be doing, shows he doesn’t have a future in any capacity at United. Someone like Eriksen was supposedly for depth yet it is having players like Fred that makes him an automatic starter right now.

If you want to watch a team continually make horrendous attacking decisions, then look no further than going to Old Trafford. It was actually an embarrassment seeing the choices that was being picked by the front line. Far too often, it was just idiotic pieces of play that curtailed any sort of momentum in attacks. Antony especially was culpable. He is incredibly one footed but the outside of the foot crosses from the positions he tried from was just insane. Bruno Fernandes was a joke in that regard. Sancho, the best of the lot, often turned down good shooting opportunities to pass. While a welcome change from the others, it is still something that he needs to mix up in his game. 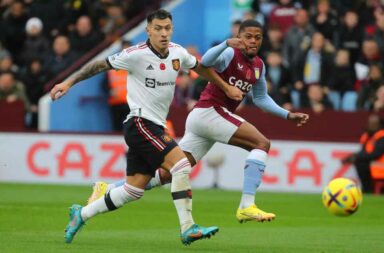