The worst day for Man Utd since they were hit for six 9 years ago, vs their city rivals. It was Spurs this time. All the more strange that we went ahead with a penalty from Fernandes. Then the madness began. The whole backline was horrendous. Stupid juggling let Ndombele score the first. Inane defending and gamesmanship let Son in the third. Stupid pass from the back in our shocking build up as always got Kane his first. Some woeful defensive decision making meant it was four before half time as Son got his second. Lack of tracking on the fifth meant Aurier, who finally scored after having two big chances. Then one of the worst acts of defending I have seen in my life meant Kane got the chance to make it 6 and he did. There was just so much wrong.

It shouldn’t be so easy to play against United as it has been these past three Premier League games. Our opponents have all shown the ability to cut through our team with consummate ease and it is quite frightening. The individuals in defence, the defence as a collective and even the team as a whole were a shambles without the ball. Individually, Bailly followed up promising starts with an absolute disaster first 45 mins. He is put into a horrendous position by his defensive partner for the first goal but he contributes to the melee that eventually led to Ndombele sticking it away. Again, the defender to the left of him was more at fault for the second but Bailly should be more alive to the situation that allows Son to go through on goal. The third, he can only blame himself. Playing that pass even if you hadn’t recently gone a man down and are goal behind would be ridiculous but to do it in the aforementioned situation is absolutely criminal. The fourth, he does not go across the near post and Son dispatches. For all his ability, the fact remains that Bailly’s penchant to drop absolute stinkers – Newcastle, Brighton, PSG – will make sure that no one believes in him going on and establishing himself as a Man Utd CB. Maguire isn’t for sure. The mistakes for the first two goals put us in the mire and they are pathetic to say the least. The weak header and scrambling for the first, the stupid foul on Kane and then the failure to stop the ball being played quickly was awful. His leadership skills are lauded by many connected to the club but you seldom see it on the pitch. Consistently, United’s backline looks disorganised. They give up far too much space in the wide areas by the full backs being far too narrow and with the Spurs full backs being Aurier and Reguilon, doing so is incredibly naive. Worst of all, they lack the protection and are worked far too much than a defence in a top side should. It is this part that is probably so concerning because knowing you have such weaknesses at the back and letting them get caught out with so many 1v1 opportunities. Having spent £130m on that area last summer with a further £18m investment in Telles to come, it still being by far the weakest department of the team is very scary with things to come

It is a big season for Martial. His best goal-scoring season, voted by his colleagues as their player of the season, the doubts still came regarding his suitability to lead the line for Manchester United. Palace and Brighton were quite horrible, his touch even disintegrating to a woeful level that I have not seen from him before. So you see today, against the manager who quite publicly admonished, an opponent striker that Wayne Rooney believes is the proper no.9 that United lack, in Harry Kane, you would have thought there would be fire in his belly. He started like so, winning the penalty that Bruno dispatched to put us ahead. And generally, while he was on the pitch, he was mostly involved in the more fruitful endeavours we made on the Lilywhites’ goal but then the sending off. It was petulant and quite soft but it was a red, even if Lamela should have gone with him. He will now miss 3 games with violent conduct and Edinson Cavani is about to walk through the door. His type is more akin to what the pundits and some fans want in a number 9: perpetual mover, in and out of possession; constant nuisance to the centre backs whether it be with his back to goal or into space; and most importantly, an amazing goal-scoring record with Napoli and PSG. Everyone knows he has an issue of being clinical and in a team that haven’t been fashioning chances the way they were post lockdown, one might wonder if that lack of efficiency might come back to bite him then there are the injury issues that came with his old age, the Uruguayan now 34 years old. But if he comes in and performs as he has been in recent years, being able to stay fit, then by the time Martial is available to pick again, he might have to come to terms with being affixed to the bench because you don’t see Solskjaer shifting Rashford to the other side or onto the bench and Martial on the right has never been a good idea. So what was supposed to a big season for the Frenchman might unravel into a story that was familiar under the previous manager. This time though, he will have little else to blame but himself.

Will the Rot be put to a stop?

You remember the game against Burnley in January where the team had lost, Rashford had just been confirmed to be out for a long while, Pogba was still out, Bruno negotiations were dragging. The stadium emptied with incredible quickness, at a very early stage. Those that stayed turned to the board. You feel like today would have been the same if fans were allowed in the ground. The club is scratching around for players after the poor saga with Jadon Sancho, which now looks unlikely to happen. Ousmane Dembele quickly disseminated once it became clear that Barcelona were not able to get Depay.  Telles and Cavani are coming in but it won’t be enough. The club’s biggest priority was right wing and Sancho was the first choice. The fact it has gotten to the point where it looks like an option C or D will be drafted is a shocking indictment. Even worse, the possible four signings wouldn’t be enough anyway. The lack of DM and/or CB in the prospective buys will mean that the defensive structure won’t see the improvement that is needed because I doubt that the coaching staff will able to organise them any more they already have. But the rot doesn’t stop with the board and their shocking transfer business. It runs through the whole club. What was quite disheartening about the defeat was the lack of spirit or fight when it all fell in after the terrible first half. You look to leaders like Pogba, Maguire and De Gea to make sure that the loss was done so professionally but it didn’t come. The mentality in the team has been an sickening issue for a long time and you see it with games like today. The Shaw tackle on Lucas was an example of just showing absolutely no composure and he was lucky that he wasn’t sent off as well. The Pogba tackle for the penalty was pathetic and one of the brainless acts on the pitch today, which is quite an achievement. It is clear that United are a side that are feeble and curl into the foetal position whenever there is a bit of adversity. In fact, the substitution of Bruno and Matic are quite strange because those are the two you would expect to put in the effort and lead by example in the difficult circumstances. The thinking behind it may have been something, to shut up shop, but in reality, it did nothing to change the flow of the game. 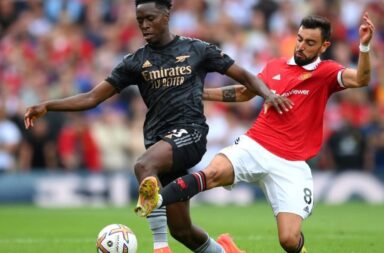