City's Richards: It's An HONOUR To Beat United 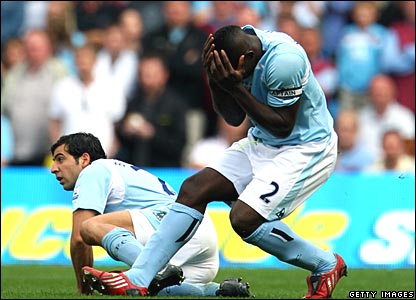 Can you imagine any United player claiming that it is an ‘honour’ to beat City? No, me neither. Micah Richards has spoken out about City’s chances ahead of the derby, reflecting on their results last season. ‘Unbelievable’, ‘fantastic’ and ‘great honour’ is how he described it.

Honestly, City are a MASSIVE club!

“It was unbelievable,” says Richards. “Beating them at our place lifted our confidence, and it made us think we could beat anyone on our day. To do the double over them, which had not been done in so long, was a fantastic feeling. It was a great honour for the lads, a real achievement. Some teams that do beat United fluke it, but if you look back at both those games we played some good football. We’d like to carry on that form against them on this time around.”

There’s no denying that City were worthy winners at Old Trafford, with United playing their worst game of football I’ve seen since the 4-1 at the Riverside, but United still created more chances and still massively dominated the possession, with 62%. Regardless, we’ll give them that one, but Richards is having a laugh if he thinks they played ‘good football’ at the Wastelands, where we doubled the amount of chances they had, as well as enjoying 60% possession of the ball. We played them off the park yet we were unable to pick up a goal through a flukey deflection, unlike them.

Sky Sports: Geovanni’s first-half strike against the run of play was the difference between the two sides as Sven Goran Eriksson got the better of Sir Alex Ferguson. The Brazilian scored just past the half-hour mark with only City’s second shot of the game, as he fired past Edwin van der Sar from 25 yards. United had the better of the possession throughout the match but were unable to convert their dominance into a goal past Kasper Schmeichel.

The Guardian: Not even the most impassioned City supporter could truthfully recall a five-minute period when the team in blue managed any form of superiority. Even Eriksson wanted to express sympathy with City’s opponents as he tried to make sense of a game that could be replayed a thousand and one times and would never cease to amaze.

United attacked with pace and purpose, they stretched their opponents, forced corner after corner, rattled the woodwork and laid siege to Schmeichel’s goal. In many ways, it was the most one-sided derby here for years – a comprehensive 0-1 thrashing