Manchester United anti-Glazer protests - this is just the beginning

Walking up Warwick Road yesterday afternoon, surrounded by Manchester United fans singing, brought about the adrenaline you’d usually have on a big match day. We knew we weren’t going to see a game but being in a crowd and chanting on the forecourt of Old Trafford was mint.

Green and gold everywhere, like it was back in 2010, having a few cans and catching up with people you haven’t seen for time. After the pubs opened up a few weeks ago, this was the next stage in getting back to normality. I hadn’t realised just how much I’d missed the routine of going to the ground, which we had previously taken for granted before covid, and being amongst a crowd.

We moved to outside the East Stand, halted at the Munich tunnel, as lads climbed up on to surrounding walls and held up anti-Glazer banners. Green, yellow and red smoke filled the air to the point at times when you could only see a few feet in front of you. Songs for Ole Gunnar Solskjaer were sung on repeat, in contradiction to the vitriol slung at the manager on social media by many of those with LUHG in their bios.

Not long after, someone next to me went “they’re on the pitch!”, having been sent a picture of the telly from someone at home. With thousands outside Old Trafford, a few hundred managed to get inside. One boy was chilling out on the top of the nets, others kicking a ball around and reenacting Wayne Rooney’s bicycle kick against City, with smoke from the pyros swirling around them.

Meanwhile, other fans gathered outside The Lowry Hotel with the players watching what was going on from their windows. Police were on the scene and started throwing sly digs when they thought no one was watching. Kick-off had been delayed and the police struggled to clear the area. 16 years of frustration had led to this moment and our fans were going to make themselves heard. 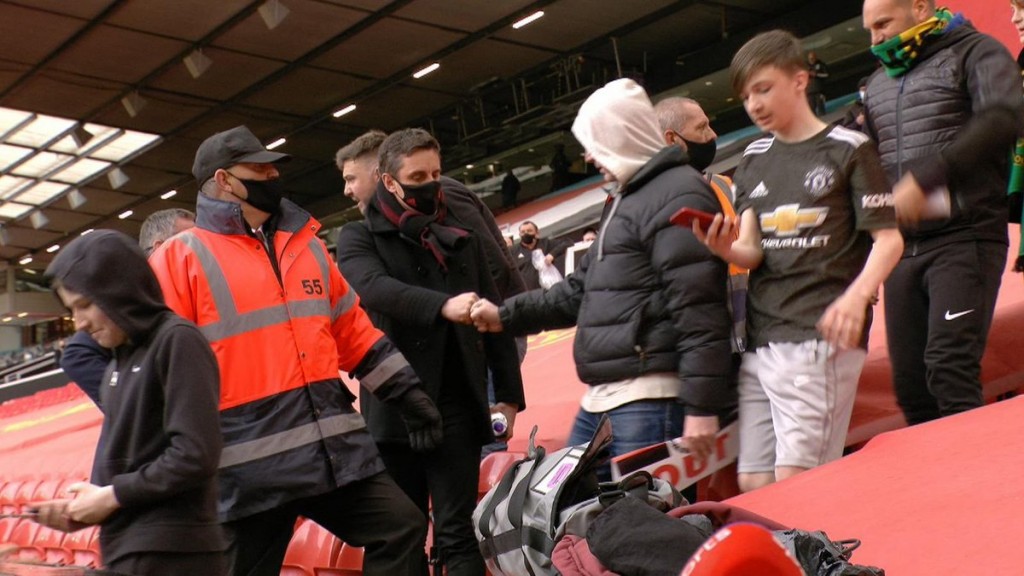 Watching Sky Sports when I got home, waiting to hear when the new kick-off time was going to be, it was good to hear pundits like Gary Neville, Roy Keane and Jamie Carragher show support for the protest.

It was important for the fans that two former captains publicly showed solidarity with us. Having kept quiet on the Glazers before now, much to our frustration, it was a big moment to have them finally join us.

“The United fans, we have to applaud them,” Keane said. “They’ve had enough. That’s why they’ve reacted the way they have. I find it difficult to criticise them.”

While Carragher could have used the events to have a pop at United, particularly after a flare and cans were thrown in his direction inside the ground, the Liverpool man also gave his backing.

“This thing that Manchester United fans have done today, I actually think it’s a good thing,” Carragher added. “Protesting about what’s not right at your football club — I’m behind that.”

Graeme Souness, who had talked about how he feared for his life when one can had been thrown, was less supportive. Having a difference of opinion on how we should protest is one thing but to spout lies like he does, unchallenged, is not acceptable. He claimed the Glazers had spent a fortune on the club, when the reality is they haven’t spent a penny, rather have costed us around £2 billion. He claimed we were only protesting because we weren’t at the top, questioning where these protests were when Sir Alex Ferguson was winning titles with us. Presumably he was living under a rock in 2010 when, as champions and on the back of three titles in a row, and a European Cup, the anti-Glazer protests were at their peak. 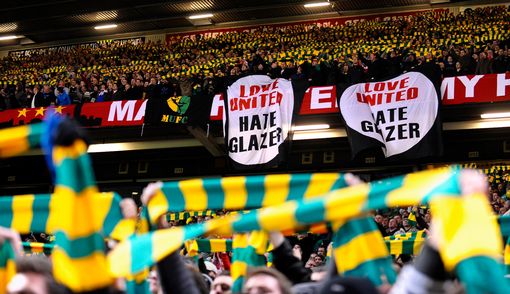 It’s remarkable that a man who incited a riot when he was Galatasaray manager, sticking the club’s flag in the centre of Fenerbahce’s pitch after his team beat them, could be so critical of our fans.

While not all agree with the pitch invasion, which started with a fan kicking in one of the doors in to the stadium, it’s undeniable that without that the protest wouldn’t have got anywhere like the coverage it has. Our fans managed to call off the biggest game in English football and the world is talking about why we did it.

Joel Glazer’s decision to join the ESL may have been the catalyst, lighting a fire under the fans, but our owners have had this protest coming for years. Their immoral and corrupt ownership, which sees them pay themselves dividends while not investing a thing in to the club, as our stadium rots away and our hated rivals lift league and European titles, is unforgivable.

Unsurprisingly, the club has released a statement condemning the supporters responsible for criminal damage. Opinions among the fanbase will vary on whether some took it too far and clashes with the police, regardless of what officers did to provoke, are never going to lead to good press.

But what we saw yesterday was something we have been crying out for. For too long, while voicing our discontent, there hasn’t been the unity and organised protests that we’ve needed.

This is just the beginning. The momentum must continue and the Glazers have to go.