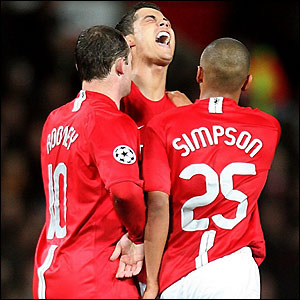 There has been a lot of fuss made over Wenger’s team of kids this season, after Arsenal had been written off in the summer. The team of youngsters are currently top of the league on goal difference with a game in hand to play.

After United drew with Arsenal at the Emirates last weekend, mad celebrations continued on the field, Wenger’s team seemingly delirious over scraping a point against the Champions.

The Official Arsenal site said, “if there were question marks over Arsenal’s youngsters ahead of these last two games — Liverpool away and Manchester United at home — they have been emphatically answered in the positive.” The Guardian said, “When Evra then survived a clearance that he hit on to his bar, that strike appeared to have handed Arsenal their first defeat in 24 games. While that would have been very much mission accomplished for United, especially as Arsenal have played a game fewer, it would have been cruel on Wenger’s young team.” The Telegraph talked of, “Wenger’s young side, a team who simply refuse to be beaten.”

This got me thinking, just how young is this young side the press are raving about. Apparently they proved themselves by scraping a draw at home to us, this young Wenger team.

I looked at the teams who played on Saturday in the 2-2 draw. Comparing the teams, minus the goalkeepers, who are both in their 30s, gave me quite a surprise.

On average, there is less than a years difference between United and Arsenal’s players, yet it is Arsenal’s team who are praised for being so young, and overcoming the struggles of Liverpool away and United at home, with a point a game. Arsenal are lauded for having a team for the future, whilst the same is not said about United, presumably because of Giggs, Scholes and Neville. With Nani, Anderson and Simpson all looking shining replacements, I don’t see why it should be much of a concern.

It’s also interesting to note that the team that saw off Dynamo Kiev 4-0 in the CL on Wednesday looked like this.

Of course, it is likely to be the Wengerboys exploits in the Carling Cup which has given them the reputation of a team of “kids”, but comparatively, United are in an extremely similar position to Arsenal in terms of youth in the team. The difference is we are the Champions, so do remember that the next time you hear the MOTD team/the press/your Gooner mates harping on about the future of Arsenal.