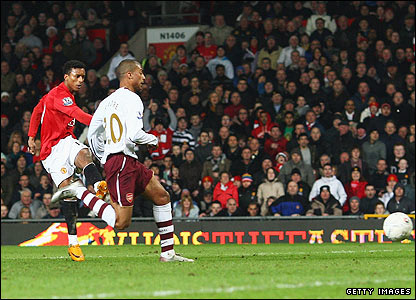 In his début season, Nani scored a penalty in the European Cup final, he lifted the Premiership trophy, he was a contender for our goal of the season, and he scored against Liverpool and Arsenal.

This season was has been considerably less exciting for our winger with him failing to make the most of the opportunities presented to him.

Nani has today claimed that he is confident about United’s match against Porto tonight as well as confessing he is already looking forward to next season after not making much of an impact this season.

“Why am I confident? Simple, because we have the best players in the world,” said Nani. “We have the confidence wherever we go. OK, we know Porto are a very good team, play good football and showed their own strengths at Old Trafford but it may be more difficult for them now. When you’re at home you have to go forward more, and that could leave them under pressure. We are going there to win and we’re confident we can do it.”

Nani looks at the disappointments of the season, whilst also keeping an eye on the cup finals that might be coming our way.

“At the end of last season I thought the next one was going to be my year,” he added. “Maybe it’s not gone how I would like, but I had injuries at the start and everything changed. You just have to be ready when you get the chance – I only hope next season will see me play more games. But if this season finishes at Rome and Wembley, plus another league title, it would be fantastic.”