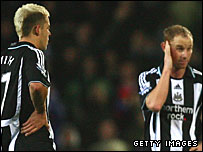 Chelsea travel to St James Park this afternoon to take on an in form Newcastle side. Over the past 8 games, Newcastle are ranked 4th in the form league, looking a very different side to the one we beat 6-0 at home and 5-1 away.

Several people have commented on United’s destiny being in their own hands, but that isn’t necessarily true. Last year, United won the league after Chelsea failed to beat Arsenal a few weeks before the end of the season. Today, United could win the title under similar circumstances. Today, our destiny is in the hands of the Newcastle and Chelsea players, and it appears that Newcastle are more than willing to help us out!

“For any game at St James’ Park the fans wouldn’t let us rest on our laurels,” he said. “There is always an incentive to get a result, especially when we’re at home in front of our own supporters, but when you’re up against one of the big teams you definitely want to show that you can go out and compete with them. I’ve got a lot of friends at United who I still speak to and so it would be an added bonus if I could do it for them as well. The text will come flying in, but obviously they have their own things to look at and their destiny is still very much in their own hands. Most important is that we make sure we finish the season strongly.”

“When you’re in football, and you play against your friends, you want to be the best,” he said. “I am going to fight, and try and be the best. They are coming to us for their next game, and it will be a good game. We’re not going to make it easy for them. It is important for us because we’re playing our last game of the season in front of our own crowd, and we want to give them a good game. Also, it is good for us because it is a big test. We want to be in the top six next year, and it is a good test to see how far we can go next year. It is our last game in front of our own crowd, and we need to give them good entertainment. It’s important for us and the manager as well. We want to build something special for next year.”

“Chelsea have to come to win,” he said. “After a crucial game in the Champions League it is yet another huge one for them. But this is our final home game of the season and we want to give our fans, who have supported us so well this season, a really good send-off. Everyone in Manchester will be willing us on. We are all fully aware of just what a massive game this is and its implications. Last season I remember Titus Bramble smashing into Michael Ballack after 25 minutes and I don’t think he’s been back too long since that tackle. We managed to keep a clean sheet that day and will be looking for more of the same, plus grabbing the win.”