Manchester United made it four straight wins under caretaker boss, Ole Gunnar Solksjaer, after beating Newcastle United 2-0 at St.James’ Park on Wednesday night. Romelu Lukaku and Marcus Rashford grabbed the goals in the second half for the Red Devils. Contributing writer, Nathan Quao, has picked out a few points after observing the tie.

If there was something needed for a tough encounter at Newcastle, it was a cool head in midfield to run affairs and stitch things together for the Red Devils and Nemanja Matic gave that in the game.

The Serbian was ever present when an interception was needed to break play and he was also the dictator of passing especially when moves had to be built from defence and that was important when the game started getting choppy in the second half after the opening goal from Lukaku.

In addition, he provided great physical competition to the likes for Mo Diame in the Newcastle midfield.

Matic’s showing may not be headline-grabbing but on a night when Paul Pogba could not really dominate, the Serbian kept things going for Man United and that is testament to his abilities to provide something else apart from his role of being a destroyer and shield.

When things are not working well in a football match, the manager must seek to change the situation and make things better and Solksjaer showed that he was very ready to decide the fate of his team against Newcastle.

After the match, he spoke of the lack of sharpness in passing and forward play in the first half and thus, after 15 or minutes in the second half, he decided to freshen the attack by taking off Juan Mata and Anthony Martial; two men were not at the races at all for Alexis Sanchez and Romelu Lukaku.

What did ha gain? A Lukaku goal after barely a minute and a Sanchez assist later in the match.

Whatever descriptions may be given to this development, it is evident that Solksjaer knows a thing or two about reading a match and taking a decision based on what he has witnessed.

There will be tougher days when the opposition will be better and trying to outsmart another team will test all that the Norwegian caretaker knows.

Until that day, he will get the credit for seeing what was not functioning at St. James’ Park and taking out his tools to get Manchester United the 2-0 victory.

And oh, he made an attacking change even with the score at 2-0 in his favour and showing nothing was very wrong with wanting more goals from a winning position.

Is it not ironic that the long-awaited clean sheet came against a team that was determined to keep the Red Devils out of the scoring groove?

Finally, Solksjaer and Man United will see a zero in the opponent’s score box in the stats column of the match report but that had be to worked for.

Focus was key in getting it especially when one considers Newcastle’s threats in the air in the shape of Lascelles and  Rondon. Add Matt Ritchie and the Magpies are ready to fly at crosses all evening.

But Man United survived it to get the victory and more so, when getting to the end of the match, minds and legs were beginning to wane. Prime example was Paul Pogba’s scoffed clearance which sent the ball towards Rondon.

Cleans sheets build confidence and more of those are needed even if the next Premier League foe is Tottenham. The defence must strive for excellence at Wembley. It was be almost impossible but how do you become part of the best when you have no ambitions of going to Spurs and staying spotless while trying to win the tie.

If Spurs could manage it at Old Trafford, then the Red Devils can replicate the feat at Wembley on January 13. 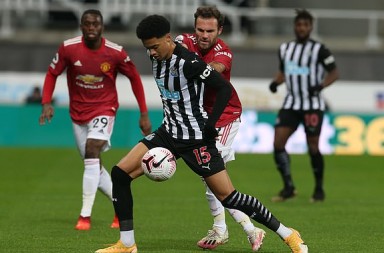