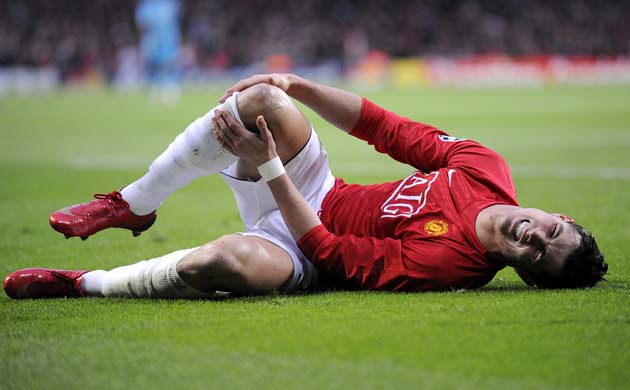 Whilst becoming increasingly frustrated with Cristiano Ronaldo’s antics last season, I did always feel some sympathy for it. Two wrongs don’t make a right, but we had all seen the countless occasions when players had intentionally kicked at Ronaldo and the referee did nothing about it. He was battered and bruised during his time in the Premiership, so whilst never really wanting to justify it when Ronaldo went to ground too easily, I did understand it. It was a big two fingers up at the wankers who had kicked him that game and got away with it. If the ref wasn’t going to give him a freekick for being fouled, let’s see if the referee would give him one when he dived.

Regardless, it is an embarrassing thing to have a diver in your team, but worse than that, an ‘overacter’. You’ve seen the replays on the telly and no contact was made but the player is still holding his ankle/leg/ribs/head regardless. The best example of this was Michael Ballack’s cheating behaviour in the Community Shield, who fell over thanks to the gust of win Patrice Evra created when rubbing past him. Ballack rolled around on the ground holding his ribs and the slow motion replays showed him up.

Sir Alex Ferguson has had a whinge about this sort of behaviour.

“It’s absolutely ridiculous and something has to be done about it,” Ferguson said. “Players are getting stick and kicking the ball out, and the fans are whistling because people stop playing. The other players are as guilty as the guy lying down. They have no idea what is wrong with the guy lying down. Most of the time there is nothing wrong with him at all. The problem is how much the referee can tolerate when the players go down. There is no doubt it has been exploited to ridiculous degrees now. I don’t know how to stop it.”

Ferguson has openly criticised Keith Hackett, the Premier League referees chief, on numerous occasions, and has again dropped his name in it.

Well, I’m glad he at least waited for Ronaldo to play for another team before starting this attack, but it does come across a tad hypocritical. It’s fine and well having a go at all these cheats now but he kept his gob shut when one of the worst of them was wearing our shirt!