No Contract Offer For Neville... But Does He Deserve One? 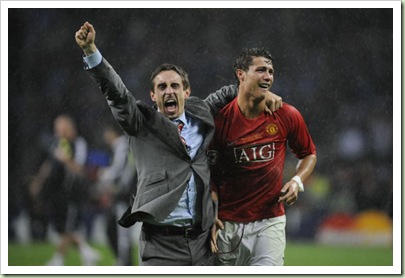 It was a bittersweet moment for Gary Neville at the end of last season. As as lifelong United fan, to celebrate on the pitch in Moscow after seeing the club win the European Cup must have been an amazing feeling. The Premiership title had been won a week or so before, with United really establishing themselves as one of the top clubs, if not the top club, in the World that year.

For Gary, as United captain, he knows he missed out on the opportunity to be the one to lift both those trophies, watching Ryan Giggs and Rio Ferdinand delight in the honour. Whilst it was rather fitting that Giggs got the job, who equalled and broke the appearances record for United on the days he lifted the Premiership trophy and European Cup, Neville will obviously have been gutted to have missed out.

However, Neville is back now, more determined than ever before, but his performance against Arsenal showed him to be severely lacking. He reckons he just needs more games, but with his contract set to expire at the end of the season and no new offer on the table, should he be worried?

“I just need games,” said Neville. “Having been out for so long, I need a run of five, six or seven matches. It’s just a case of remaining patient, keeping fit and training well every day.”

With Wes Brown playing more games than any other player in our Double winning season and Rafael Da Silva proving himself as someone with great potential, Neville might find his request for a run in the team turned down.

Surely the only reason for a new contract would be sentimental ones, something the manager doesn’t oppose, after assuring Paul Scholes of a Champions League final place. Whilst I think Neville’s presence is good for the club, instilling the passion and desire in to the players, I don’t think his role within dressing room necessarily needs to be as a player.

What do you think the club should do?