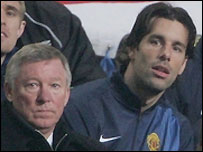 Ruud joined the United team in training today, following months of speculation about where he will be playing next season. We have until tomorrow to see the “Ronaldo and Rooney punch up”, so Ruud is set to steal the limelight. It is surely only a matter of days before he signs for Real and Bayern, and I expect to see pictures of a sullen Ruud at Carrington in tomorrow’s tabloids.

It raises the question, where did it all go so wrong? According to the tabloids, over a whole year ago, with it being reported Ruud handed in his transfer request a few days before the FA Cup final clash against Arsenal. I was one of the heart broken fans who left Cardiff that rainy day, gutted, and left wondering what had happened to Ruud. He had several opportunities, (one which he finished, but was ruled out for offside) but just didn’t look sharp enough. He had been brought back too early from a long term injury that season, and hadn’t looked quite right, but we all expected something from him on Cup Final day, against a team he’d had plenty of rucks with, and usually came out on top. It wouldn’t then surprise me if he’d asked to leave just days before, because his head was in the clouds that day.

Ruud is the most deadly player in the 6 yard box, and the fuss made over the lack of goals scored outside the area supports this. It is not just his finishing that is spot on, but his positioning. He knows where he needs to be to score a goal, and he more often than not makes sure he is there. He is no stranger to great runs and beautiful finishes however (I will always consider the Fulham goal as his best ever at United), but thrived on great crosses in to the box. Since Beckham left, and players such as Rooney, Ronaldo, Park, and Saha, to name a few, have joined, United’s tactics have changed, especially this season. Our wingers enjoy coming in to the centre of the park, and attacking the box. Giggs, who has been bombing down our wings for years, became a central midfielder towards the end of the season, adding to this attack of the box, which again, has increased the attacking activity down the middle of the field. This makes for more exciting, faster flowing, attractive football, but the downside is this doesn’t suit Ruud’s game. But, despite this, he still managed to rack up 21 league goals in 28 starts… which is 5 more goals than any player at Chelsea managed, and 11 more than any player at Liverpool.

When Ruud was dropped in favour of Saha in the Carling Cup final (which I discussed here) I agreed with Ferguson’s decision. Of course people were shocked, Ruud is one of the best strikers in Europe, but Saha had earned his place. We’ll never know the ins and outs of what happened (well, until Ruud brings out his book…) but clearly Ruud was upset with the situation, and this was only the start. Saha kept his place in the starting lineup, and again, proved to deserve it. United were playing their best league football of the season so far, and two weeks after the Carling Cup final, Saha scored both goals in the away 2-1 win at West Brom to give us five points breathing space between us and Liverpool. And Ruud sat on the bench, miserable, for the entire 90 minutes.

United have always had a policy on no single player being bigger than the club itself, and Ferguson has strongly reinforced this in his 20 year stint at United. Those who fail to grasp this are likely to be shipped out. Ruud has, unfortunately, fallen in to this group of people, when really, he should have tried to take a leaf out of Saha’s book. Two seasons ago, Saha was the third highest scorer in the Premiership with 20 goals (tied with Ruud), then joined United and worked his arse off. He battled injury after injury, and every time he got the opportunity to play, he’d work his socks off. It is this attitude that lead to him being the highest scorer in the League Cup last season, and why Ferguson felt he deserved a first team place. He started more and more games from the final onwards, to the exclusion of Ruud, and by the end of the season, managed 7 goals in 12 starts.

When Ruud did get the chance to play again, after Rooney got injured at Stamford Bridge, he looked nonchalant and lazy. His pathetic penalty attempt against Middlesborough seemed to be the final nail in the coffin. Any small chance we had at winning the title vanished, and now 2nd place wasn’t as secure as it had been. Ruud was suffering from the tactics, as well as looking like he couldn’t care less.

And so the rest is history, and although he is back in training with United, it seems without doubt he will be off soon. Ferguson has said that Ruud could stay if the right offer didn’t come in for him, the £15 million which Real are a few million short of at the moment, but this is more than likely mind games from the master. With having two teams interested, the likelihood of us getting our asking price is increased, and at this point, I’m happy enough to see him leave for that. If/when this happens, it raises the question of which route Fergie will take next. Buy a replacement for Ruud? Or rely on Saha (who is entirely capable of being our starting striker, in my opinion, but who is injury prone), with Rossi, and possibly Dong from December onwards as backup? Or will he use the money to bulk up our midfield, the most likely candidate being Spurs’ Carrick?

This is a sad ending to a fan’s favourite career at United, but I do want the best for him wherever he goes next. I enjoyed watching the football United played when Ruud was out of the team, and I hope we continue on with this next season… as well as the Old Trafford faithful finding time to give him a chant every now and then.

What do you think? Click here to talk about it on the Republik of Mancunia forum.