Out With The Old, In With The New - Giggs And Scholes Replacements Sorted 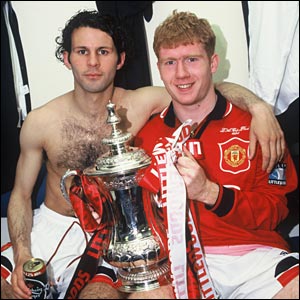 The problem of replacing Ryan Giggs and Paul Scholes became apparent a few years ago when the players crept in to their 30’s. The pair had been such a vital part of our team for so many years, the prospect of replacing their skill, as well as their presence and experience, was not one we relished.

Scholes and Giggs showed last season that they still have an important part to play in our squad, despite now being further in to their 30s, between them scoring the first and last goals in our title campaign.

Giggs’ highlights were his goal against Wigan on the final day of the season, which ensured the Premiership trophy was staying in Manchester, as well as United’s last penalty in the European Cup final shoot out against Chelsea. Scholes’ best moment of the season was his blinding strike against Barcelona which put us through to the final.

Sir Alex Ferguson yesterday spoke of next season, claiming the problem of replacing Scholes and Giggs is not of the magnitude it appeared to be in the past. 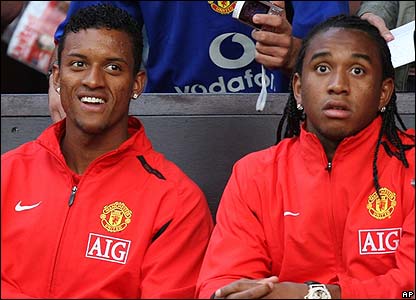 “I think we’ve got a good team and there’s some development still to come,” Fergie said. “There are some young players who for a period last season did very well, and for a period showed their youthfulness by being inconsistent. Those young players will come on a bundle now. That triumph of winning the league and the European Cup can only help us. Players like Anderson, Nani, Rooney and Ronaldo will emerge from that without doubt, and be really top players for us. We’re pleased at their progress.”

He then went on to talk about what role these youngsters, in particular Nani and Anderson, will give to our team in relation to Giggs and Scholes.

“Giggs still gives us a bit of real quality,” Fergie continued. “He won’t play every game, but if he can give me 25 games of real quality – which he can do because he’s looked after himself and doesn’t carry any weight – then that can still keep us at the forefront in terms of players who can decide matches. Anderson and Nani will improve and that’s the reason we bought them; to replace Giggs and Scholes in the long term. Scholes without question will give us another couple of years at the top level. Age-wise we’re good, those are my only two concerns.”

Before playing a match for us, there was a lot of hype about the players. They had joined the club young with large transfer fees, and everyone wanted to know about them.

Nani and Anderson both played a bigger part in our season that we probably all imagined upon hearing they’d signed. Ronaldo had been thrown in to the deep end when he joined us at just 18-years-old, simply because we didn’t have anyone else to play on the right wing. However, Nani had Giggs, Ronaldo and Park to compete with with a place on our wings, and Anderson had the tougher job of edging out Hargreaves, Scholes and Carrick (and Fletcher).

However, when we were knocked out in our first Carling Cup game against Coventry at Old Trafford, Park still hadn’t recovered from the injury he sustained the season before, Scholes was sidelined long term after an operation, and Hargreaves couldn’t sustain his fitness, Nani and Anderson were given plenty of first team opportunities.

Nani made 40 appearances for us all in competitions last season, whilst Anderson played in 38 games.

Both players’ highlight came on the very final day of the football season, when Nani and Anderson scored penalties in the shoot out against Chelsea. Whilst the likes of John Terry, Nicolas Anelka and Cristiano Ronaldo messed up, Nani and Anderson can be extremely proud of the part they had to play in our European Cup success.

That aside, Nani scored brilliant goals against Middlesbrough and Spurs, as well as finding the back of the net against Arsenal and Liverpool. There was also his ball juggling routine against Arsenal in the Cup, which left Arsene Wenger “humiliated”. Aww.

Anderson bossed the midfield when we played Arsenal and Liverpool, showing Steven Gerrard and Cesc Fabregas were no match for him. He filled in remarkably for Paul Scholes, meaning we didn’t even miss Scholesy really. He was impressive and fearless against all his opponents and has created more excitement than any new signing for a while. He was voted Man of the Match in our trip to Anfield, when United left with 3 points. Before the European Cup final, Anderson had yet to score for us, however came on off the bench for the sole purpose of taking the penalty. He strode up confidently and smacked the ball down the centre.

They both have bags of potential and seem really eager to do well. Whilst it’ll be a sad day when Giggs and Scholes hang up their football boots, United’s success will continue, aided by Anderson and Nani.