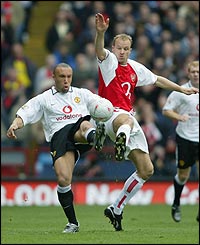 Another day, another ABU article, following on from the appalling attempt from Peter Bills, which signalled the need for him to stick to his rugby writing, rather than delve in to the waters of football writing where he is massively out of his depth.

This one suggests that Ferguson is hypocritical to complain about the treatment of Ronaldo because of Keane and Ince. That makes no sense? You bet!

Sir Alex Ferguson has long been known as a worshipper of expediency but his latest rant in defence of Cristiano Ronaldo is sheer hypocrisy. The Manchester United manager claims there is a systematic campaign to kick the Portugal winger out of the game. But Ronaldo is only suffering the same sort of treatment any talented, skilful player at his high level has had to put up with over the years. And that includes players who have been on the receiving end of a United battering.

Can Fergie really say that players such as Roy Keane, Wes Brown, Paul Ince shied away from letting playmakers know they were there?

Hold on, let me clarify. Ferguson is a hypocrite for claiming Ronaldo is systematically singled out for rough treatment from every opposition because he’s had players like Keane, Ince and Brown on his books.

Because of these three players, Ferguson has no right to complain about the treatment of Ronaldo, which even Graham Poll has acknowledged as a game plan of the teams we play? Where is the logic? All teams have more physical players, it is of course part of the game. However, having tough players who use a physical approach when meeting all opponents is nothing like one player getting singled out by every opposition he comes across.

Arsenal fans in particular will cry foul at the Scots’ latest mind game with referees. They believe United played a significant part in packing Jose Antonio Reyes off back to Spain with their bullying and point to the treatment meted out to the winger in the 2004 FA Cup semi-final. After that match Arsene Wenger claimed the physical approach of Keane and Paul Scholes crossed the line and when the boundaries of acceptability are shifted it is hard to drag them back. Just ask Ronaldo.

This was the same game where Robert Pires should have been sent off for a disgusting foul on Gary Neville with less than half an hour played, and Reyes played just half an hour.