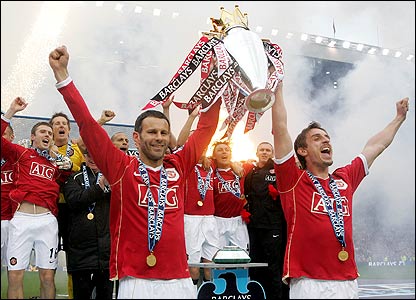 Remember the days when it looked as though Chelsea’s reign would last forever more? They were an efficient machine, powered by the mighty captaincy of John Terry with all the arrogance in the world provided by Jose Mourinho. When we beat them 1-0 in 2005, during a season where they would go on to finish eight points above us in the league, we had Richardson, Bardsley and Rossi on the bench, whilst they had Gudjohnsen, Carvalho and Wright-Phillips. We were oceans apart and even the idea of matching them any time soon was totally far fetched.

Ruud van Nistelrooy was our top scorer that season and the second highest scorer in the league, scoring 21 goals, more than a quarter of our total. He left that summer, we didn’t buy anybody to replace him and instead just bought Michael Carrick, by everybody’s reckoning a poor man’s Roy Keane, the former captain we were desperately trying to replace.

Was this going to be fourth season running that our trophy would be in London? Sky Sports thought so, predicting we would finish behind Chelsea, Arsenal and Liverpool the following season.

When we thrashed Fulham on the opening day of the season our fans seemed fairly optimistic though. We played some bloody brilliant football that day and granted, it was only Fulham, but our lads were on fire. After Cristiano Ronaldo made it 4-0 with less than 20 minutes played, Wayne Rooney grabbed his face, both players grinning, and all the fuss about the World Cup and Ruud and our strikeforce and Roy Keane seemed insignificant. We were too insecure following the years without the Premiership to get cocky but things certainly seemed to feel good again.

That good feeling, on top of insecurity, continued for the whole season. In the end, United picked up 6 more points than they had the season before, they scored 11 more goals and won 4 more games than Chelsea. We were champions again.

I doubt you needed that trip down memory lane but judging by the reaction of some of our fans recently, it appears maybe some do.

The idea of signing Michael Owen was completely ludicrous to me. I thought it had to be a shitty paper story. Signing Antonio Valencia wasn’t ever going to have us jumping for joy, I was fairly apathetic, but it was fine, I’m sure he’ll do pretty well. Signing Gabriel Obertan didn’t really feature on the radar at all.

It was time for Cristiano Ronaldo to leave and I’m glad he has. The press don’t seem to understand that perspective but then the press don’t love United and watch them every week. They didn’t have to feel ashamed every time he had a temper tantrum or feel fury every time he lost the ball and made no effort to win it back. Of course it makes no sense for a person entirely unconnected with United – why would any fan want their best player to leave? But that was certainly the case for plenty of reds this season.

I cringed when the Stretford End chanted for Carlos Tevez over the top of Sir Alex Ferguson’s end of season speech but it was definitely a chant I’d sung in the weeks preceding. As Tevez started to voice his displeasure at his current situation it became harder to support the move to sign him though. He was third choice behind Wayne Rooney and Dimitar Berbatov, with increased competition coming from Federico Macheda and Danny Welbeck. He wasn’t going to be happy so it made sense for him to leave rather than stay being unhappy, cost us a fortune, before leaving for Argentina in five years anyway. When he dragged the situation through the press it became beyond any doubt that it was time to leave. He can take his five Premiership goals with him.

We’ve now had time to adjust to the Owen signing and whilst there are still some doubts, the general feeling is positive. He’s free, his wages are next to nothing, so it’s win-win. Valencia isn’t here to be the next Ronaldo, he’s here to boost the squad. He looked good playing against United at Old Trafford so one can only assume he’ll look even better when playing for United. Obertan is one for the future and isn’t a transfer we need to concern ourselves with.

So, champions of England, two other trophies in the bag, European Cup final, FA Cup semi, with three players in and two players out, yet sections of our fans aren’t happy to hear Ferguson isn’t buying anyone else this summer.

Now, I’m not saying because we’ve done it before that naturally it will just happen again. Just because we improved the season after Ruud left when everyone else wrote us off, it doesn’t mean that we will improve the season after Ronaldo and Tevez leave. But equally, if we did following the summer of 2006 then why the fuck can’t we do it following the summer of 2009. Had Ronaldo left at the end of the 07-08 season then maybe things would be different, given the massive effect he’d had on our season, but things changed last season.

To improve on last season’s goal tally and replace the goals Ronaldo scored, we’d be looking at Wayne Rooney scoring 5 more goals, Dimitar Berbatov scoring 5 more goals, as well as 9 goals from Owen, Valencia and the likes of Carrick, Fletcher, Nani etc. chipping in with an extra goal or two. Is that really so hard to imagine? We replaced Ruud’s 21 goals and added 11 to it without buying any replacement. Is it really that unlikely we can replace Ronaldo’s 18 goals and add more, given we have brought players and expect improvements from the likes of Rooney and Berbatov?

Has Liverpool’s squad improved? No. Has Chelea’s? No. Has Arsenal’s? No. The chances of Alonso, Mascherano, Terry and Adebayor leaving are higher than the chances of them buying a brilliant talent who will massively turn them around.

Nobody is buying brilliant players this summer and there is a reason for it.

“I can only placate the fans this way and say I am not going to be stupid,” said Ferguson. “We have got that wonderful sum of money from Real Madrid but there was no way we were going to throw it away and put an extra nought on the end of the transfer which I didn’t think was value. Some of the numbers being tossed about are sky-high, not just in England but across Europe. For some reason it seems to have caught fire this summer and it has been very difficult to get value.”

I’m sure the manager would have loved to spend more of Ronaldo’s transfer fee but it made more sense to hold off and save it for when the market has calmed down. Maybe you or I would have been hesitant to make such a brave call but are we really questioning Sir Alex Ferguson here? Are we really wondering whether he knows that we have a squad capable of winning the Premiership or not? He’s won the thing fucking eleven times, so wouldn’t it be wise to assume he knows what he’s doing?

This doesn’t mean the title is wrapped up or in the bag but we will start next season as favourites. We may not win the league but that might very well have happened even with Ronaldo in the team. It’s not our God-given right to win the Premiership every season (I know, shocking isn’t it!) but I’m happy enough for August to come with no new faces and have the belief that we are going to win the title again. Ferguson believes it and I tend to side with him. The occasions when I don’t side with him I end up looking like a twat anyway.

So relaaaax. We’re in very capable hands here, the most capable in the business in fact, so let’s just count ourselves lucky for that and wish away the summer!