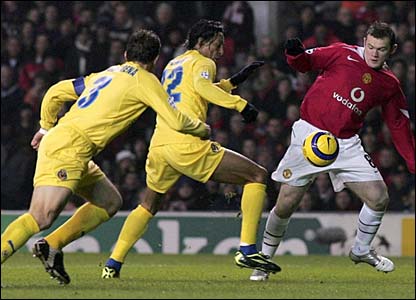 Manchester United kick start their defence of their Champions League title this evening, taking on Villarreal at Old Trafford.

Last season we had a close to perfect record in the Champions League, winning every match apart from our last group stage game against Roma (before which we had already confirmed our spot as top of the group and played a side that resembled our reserves), our first knock-out round 1-1 draw away to Lyon, and the semi-final 0-0 at the Nou Camp against Barcelona.

Can we do as well this season?

Our first game comes against the toughest competition in the group, Villarreal, who finished 2nd in La Liga last season, ahead of Barcelona.

Nihat Kahveci was their top scorer with 24 goals in all competitions, and was also the 4th highest scoring player in the league.

They missed out on Champions League football last season, finishing 5th in their domestic season the year before. Their UEFA Cup campaign was relatively short though, being knocked out by Rangers in the first round following the group stages.

In tonight’s match, Nihat is missing through injury, as well as former red, Giuseppe Rossi. This certainly gives us a good advantage.

Michael Carrick and Dimitar Berbatov are both ruled out for United, after injuries they picked up against Liverpool. However, Cristiano Ronaldo is set to make his return to the team, although is likely to be starting on the bench.

What score do you fancy tonight?