Premiership or Primera División? Fergie and Xavi Battle It Out 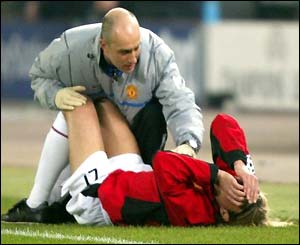 The Premiership is now widely regarded as the best league in the World, which is supported by the fact three English teams have made it to the semi-finals of the European Cup for the past two seasons. Whilst great skill and ability is required, there is added physical pressure which is all but absent in Spain.

Today, both Manchester United’s manager, Sir Alex Ferguson, and Barcelona star, Xavi, have argued their case for their league being better, ahead of the Champions League semi-final clash tonight.

But who is right?

“In England, if you do a couple of things right, people talk about you being a legend,” Xavi argued. “Here if you don’t control a ball properly or if you kick the ball into the stands, people hate you. So you have to become a better player. Fernando Torres is a better player over in England, with all the space he finds in front of him; here defences place themselves in their own box. Thierry is like a horse that needs space to turn and he doesn’t find it here.”

Morientes and Forlan are two prime examples of players who were massively successful Successful in La Liga, but who struggled in the Premiership. Morientes scored 18 goals in 25 starts for Real Madrid in the 2001/2002 season, but in his two year stint for Liverpool, could only manage a total of 8 league goals in the 41 league games he played in two seasons later. He has since returned to La Liga and scored an impressive 20 goals in 39 appearances for Valencia last season.

Diego Forlan was a joke in the Premiership, and unfortunately for United, we felt the brunt of it. In his last season for United, he scored just 4 goals in 24 games in the league, before being shipped off to Spain. In his first season with Villarreal he scored 25 goals in 38 games, being awarded with the European Golden Boot. Last season, Ruud van Nistelrooy, who had peaked with United in the Premiership, cruised in to pole position as the top scorer in the Spanish league last season, with Forland finishing 5th with an impressive 19 goals.

So Xavi, don’t judge the Premiership on the basis that Henry is shit now. He wasn’t setting the World alight in his last season in England either.

Sir Alex Ferguson has championed the Premier League, claiming that the standard of our domestic league is what aids the English teams’ success in the Champions League.

“I think, first of all, the quality of the Premier League has improved each year,” he said. “Also with the nature of the English football, with the intensity of the game and the speed of the play, you can see the power of our game. Power, however, does not necessarily win games. You have to announce quality and technical ability as well in major games. The reason English football is doing much better now is because the quality of the league has improved and that gives clubs a much better chance.”

Which is better? League football in England or Spain?