Rafael: I'm 100% a United fan and I hate Liverpool

Rafael da Silva is a bit of a cult hero at Manchester United. Signing from Brazil as a teenager and going on to win it all with us, while fighting against our fiercest rivals and showing the attitude every fan wanted to see from the players, he was well loved.

Speaking in an exclusive interview with the Stretford Paddock, Rafael has spoken about his feelings for the club, and how that was reinforced to him when he beat City at the Etihad with Lyon.

You can see my games against Liverpool, against City, in 90% of them I played well. Tevez is a great player but we never had a great relationship. He didn’t treat the young guys with a lot of respect. That day, I was so angry. But I hate Liverpool more than Manchester City, 100%. I played with [Martin] Skrtel here last season and he always spoke about this [when they played against each other], and Lucas [Leiva] is my friend. But on the pitch I respect only one badge, and it’s the United badge, so there are no friends on the pitch. My favourite goal was the goal against Liverpool. 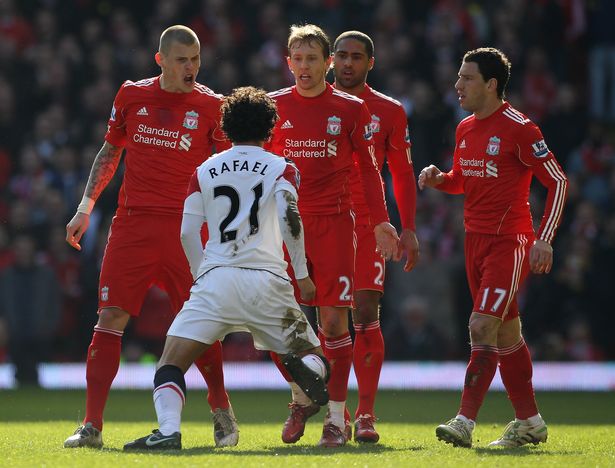 When Alexis Sanchez left the club for Inter Milan and didn’t take responsibility for his poor performances, Rafael took to social media to criticise the former Arsenal man.

It made me feel angry, very angry. Maybe that’s why I gave that comment. These days, I think it’s getting worse, people just want to blame someone. This is shit, this is bad, the coaches didn’t help me. OK, sometimes that happens, but you need to try to fight. At some point, you need to say ‘OK, what am I doing wrong? What can I do better?’. It’s too easy to blame someone else. I learnt with the best. When you learn with the best you have everything to become one of them. I thank him [Ferguson] for everything. But not just him, the players around us too. Rio Ferdinaind, Vidic, Patrice, Fletcher… I speak about Fletcher because I love that guy. He helped us a lot. Rooney, Ronaldo, Nani, everyone. Me and my brother were lucky to play with these players and to have these players around us. I admire Darren Fletcher and the way he is. I used to hear ‘Fletcher is not good enough for United’ but he always performed. He always gave his maximum.

My brother and I were in the stadium when United won the Champions League [in 2008]. I remember everything about that game. You come to this team and you see Ronaldo, Rooney, Rio, Vida, there was pressure of course, but at the same time, we wanted it so bad. The hardest thing was to arrive there. When you’re there, you take your chance. The best thing is to arrive, to have that chance to do it, so when I was there I gave 1000%.

It surprised me a lot [to play so many games]. I was ready to play but I played so many games that season, I was only 18, and I’d be lying if I said I wasn’t surprised. But I wanted to play for Manchester United so badly, to show what we could do, so my first season was amazing.

Me and my brother, we always respected everyone, but on the pitch when you’re training you forget everything. We’re there to play football, we don’t see people, like ‘there’s Giggs I’m not going to tackle him’. No. I remember I tackled Vidic so hard in training, he was furious, and I was so young, and he pulled my hair and took me to the floor because he was so angry. I went down, I didn’t say a word, and I carried on with training. I respected him. It was funny!

One of the highlights for Rafael and brother Fabio was our 2-0 win over Arsenal in the FA Cup in 2011. The brothers raced up the pitch, passing the ball between them, before Fabio got on the end of a loose ball to give us the lead. Rafael reflected on what it was like to play alongside his brother.

It was amazing to play with my brother but it was also hard. We wanted so badly to be good, to play together, but we put a lot of pressure on ourselves. But everything went right that day. My brother scored, I gave half an assist. What a game. I’ll never forget that. I imagine everyone before that game, when they saw the teamsheet, said ‘what the hell? What is Fergie doing?!’. But at the end everyone was clapping and saying what a genius.

While at one point it looked as though the brothers would spend the majority or all of their career it sadly didn’t work out that way. Suffering from injuries, Fabio spent Sir Alex Ferguson’s final season on loan at QPR, then left for Cardiff half way through David Moyes’ season in charge. Rafael lasted a further year before Louis van Gaal sold him to Lyon. But Rafael insists that he’s still a fan and is loving to see the direction Ole Gunnar Solskjaer is taking the club in.

I feel very happy [as a fan] because I see improvement, we’ve signed some good players this summer, and I just love Ole. I love him as a person and I think he’s improving a lot as a manager. I have the Manchester United mentality and I can say Ole is the same. He loves the club. You can be sure he’s going to do everything to get United back where we belong because he knows that. He played with the best. He knows you have to win trophies. He knows where United stands. I hope he’s going to improve again. I saw improvement last season and like all United supporters, like I am, I hope he can win titles. A manager needs to understand the mentality of a club, the way they play, what the supporters want to see. Every club has a way to play. Barcelona have one, United have one, Liverpool have one, many clubs have a style of play. Ole knows that. He’s trying to build around young guys and United is about this. If you are good enough, you’re old enough.