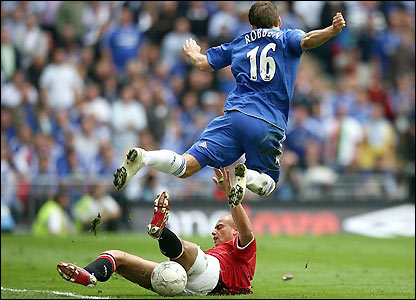 “Throughout my career I’ve always been a squad player,” said Brown in July. “The manager knows he can pick me and I can do a good job, so I’m very happy here. Leaving United is a conversation I would dread to have with the gaffer. I love playing for United. It’s my home town, so I’m just glad to still be here after all the injuries I’ve had. Leaving would be a step down.”

A couple of days later, Giggs was offered a one year contract extension, and David Gill responded to talk on Wes’ contract. “Wes likes it here and we will be looking to extend his deal.”

There seemed no reason to feel any concern over the deal. Brown has stated time and again he’s happy at the club, happy to play any part he can in our success, so like the youth team players before him, Giggs, Scholes and Neville, would see out his career with the club. Last month, it was reported that all the contract was missing was Brown’s signature, rumoured to be offered a deal of £40-50k a week, a raise of around £20k a week. Sorted.

However, in the past week it has emerged that the situation is far from sorted, and that there is every chance that Brown could leave on a free transfer at the end of the season. “We have had several meetings with Wes’ agent but they have rejected our last offer,” said Ferguson. “It is a good offer but it is our final one. That is the end of it now and we won’t be going back. There is a possibility Wes could leave, which would be very disappointing.”

Newcastle seems to be the club for Brown, with former United players Nicky Butt and Alan Smith currently up there. However, unlike Butt and Smith who were fringe players, Wes Brown is holding down a first XI place at United. Gary Neville’s comeback seems to look more unlikely with every passing month, so the question of moving seems to solely be down to money. Brown is a Manc, loves playing for his local side, is getting first team football… but £160k a month isn’t enough to keep him with the club.

Nemanja Vidic’s Serbian team mate, Branislav Ivanovic, has been heavily linked with the club, and more recently Philipp Lahm. The Bayern Munich full back is highly rated and a move in January would see him cost around the £20 million mark. However, with revenue of £200 million and a record profit of at least £60 million to be announced, the transfer fee might not be an issue.

After an expensive summer, big questions will be asked of the Glazers if Brown does set his heart of leaving. However, Sam Allardyce has admitted the chances of signing Wes before the summer are slim to none. “Wes Brown is not going to be available in January,” he said. “He may leave at the end of the season. The speculation comes round because he supposedly turned a contract down, but I can’t see Sir Alex letting him leave with Gary Neville being injured.”

I think it would be a massive loss if Brown, who Ferguson once described as “the most technically gifted defender in England” left us on a free transfer in the summer. He is a brave player who never shies away from a tackle, and whilst not as competent as the other players in the back four, he fights for the team and that is not a quality you can buy or expect from any European replacement.

How do you feel about Brown’s decision to reject our latest contract offer? Is there any chance of him staying now?