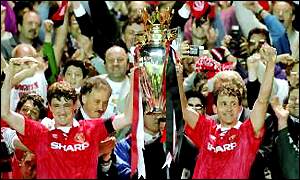 As United fans, we spend the majority of the season checking out the results of the teams towards the top, whilst usually casting a sentimental eye over Sunderland’s score. However, today is a day when we should be looking at the teams towards the bottom of the table, as our title hopes could lie in their hands.

Let’s take a look at why Bolton 2 – 0 Sunderland and Aston Villa 0 – 2 Wigan could be just the results United need to secure them Premiership glory.

Whilst most would assume Steve Bruce won’t be giving his former club much hassle on the last day of the season, the man is still a professional, and won’t be throwing any football matches for the sake of a favour to Sir Alex Ferguson.

Wigan picked up an impressive result away to Villa today, which puts them on 40 points, some 7 points away from the relegation zone. They officially have nothing, but pride, to play for next weekend.

Bolton have got themselves in to a good position with their win over Keano’s lads today and will now have the confidence of staying up as they go in to their last game of the season. However, they’re by no means safe, and if they lose to Chelsea next weekend and Fulham, who are away to Pompey, get a win, Bolton could see themselves relegated on goal difference. So they still have the pressure of getting a result, coupled with the confidence of doing so.

Will teams in the bottom half of the table, Newcastle, Bolton and Wigan, be the ones who decide who wins the league this season?