Republik of Mancunia vs The BBC 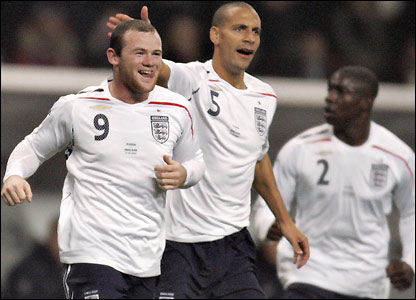 After watching England vs Russia during the week, I was left fuming by the comments made by Mark YSB Lawrenson and John Motson about our very own Wayne Rooney, which I wrote about here.

I made an official complaint to the BBC about the negative bias used when talking about Rooney. After citing the two examples, I ended the complaint with “this is not the first time I’ve watched England play on the BBC and heard such vicious assumptions about Rooney. There are times he warrants criticism, of course, but it is wrong and unfair the presume him guilty on every occasion, and then make no effort to apologise for being wrong.”

I today received a reply from the BBC:

I understand that you feel the BBC commentators displayed bias against Wayne Rooney on two occasions during this match.It is never the intention of the BBC to frustrate its viewers, and I would like to assure you that we have registered your comments on our audience log. This is the internal report of audience feedback which we compile daily for all programme makers and commissioning executives within the BBC, and also their senior management. It ensures that your points, and all other comments we receive, are circulated and considered across the BBC.The BBC regularly receives both positive and negative feedback about individual commentators and presenters used in our programmes. We do pro-actively research viewer opinions about our presentation teams as well as monitoring complaints. If we receive only negative reaction and feedback then we would certainly look to address this.We do appreciate that not everyone will agree with our choice of presenter or commentator and we find that certain individuals divide opinion; for example, where one person will disagree with our choice of commentator another will contact us with positive comments. If there was any widespread perception of bias we would certainly take this very seriously.

Thank you for taking the time to contact us with your concerns.

I know there were a few readers who also complained. Did you get similar feedback? I know it’s a load of bollocks, and I know that nothing is really going to get done, but I do feel better for venting. Keep your ears and eyes peeled for the next time we get to stick it to the BBC.