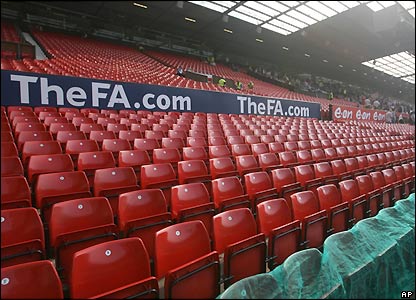 Watching the FA Cup semi-final on telly this year, now that the game has been taken away from venues like Villa Park and staged at Wembley instead, it was fairly obvious how the FA had fucked over fans with their allocation. A good ten to fifteen minutes after the restart the best seats in the house were pretty much completely empty. The FA clearly didn’t think through their idea of placing the corporate seats directly in front of the television cameras, but it was clear to all just how many people at Wembley were there for a day out than for the football.

A respect campaign for the fans has been launched:

The road to Wembley, the chance to walk down Wembley way, to look up at thearchway, to sing with your family, friends and fellow fans to support your teamin a final, that’s the pinnacle of every football fan’s dreams. Unfortunately that is a dream that doesn’t become reallity for many fans due to poor allocations.

The FA have called for respect in football. Respect referees, respect competitions by not fielding weakened teams, they’ve used the tag line ‘Lose Respect, Lose the Game’. After recently seeing at first hand in the FA Cup Final what happens to fans season after season in domestic Wembley games, we believe the respect in the game should be extended to the fans. Each season up to 16 of the 92 league clubs will play a major game at Wembley, whether in the FA Cup, Carling Cup, play offs or community shield, and most of these clubs and their fans will have some form of problems with the FA over the poor allocations as many match going fans unfortunately miss out on being ableto watch their team in what is most likely to be their biggest game of the season at our national stadium. We understand the financial problems with the FA, and we understand the need for Club Wembley, but what is unexplainable is up to 23,000 tickets given out to people who have little interest in the game itself and inevitably via an extortionate price tag, the tickets go back into the hands of the fans of the clubs playing. If most of these tickets will be taken up by fans anyway via touts, then surely the FA should cut out this extortionate middleman and supply the tickets directly.

The Respect Campaign is calling for a rethink from the FA about a fairer allocation, a look into who deserves to be counted as the football family, a greater protection of fans from touts, and a general show of more respect to thelife blood of English football, the fans.

If you want to support the Respect Campaign, please sign the online petition.