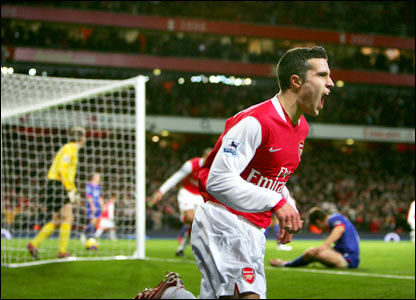 In the week preceding Sunderland versus Arsenal, Roy Keane had time to reflect on the good old days, when the United-Arsenal rivalry was given centre stage in the Premiership. The title went back and forth between Old Trafford and Highbury, with many a great game in the FA Cup, resulting in excrutiating losses and emphatic victories going to either side. As a fan, you experienced butterflies in the run up to these games, and looked upon them with both immense dread and excitement.

Things have changed massively since then, and despite Arsenal taking six points from United last season, we finished the season Champions, whilst they finished fourth and potless for the second consecutive season. United fans have looked on smugly at Arsenal’s demise, which reached a climax over the summer when their beloved Henry left them for pastures green.

However, going against what was predicted, Arsenal have risen to great heights this season, and lead the table by two points with a game in hand. Their youngsters have come good, playing great football and picking up three points most weekends. The Arsenal fans who were sulking in the shadows, making as much noise as their home fans at the Emirates, have suddenly piped up. They believe the title is something they stand a chance of winning, especially considering Liverpool, and particularly Chelsea, have crumbled away over the past month or so.

United travel down to the Emirates, the ground where Henry and van Persie scored late goals to take three points from us last January, on November 2nd. Whilst the buzz of years gone by is unlikely to ever return, there is a lot more hype about this game which resembles that of the previous grudge matches.

Robin van Persie, whilst holding the “nasty bastard” trait we so often see in the Dutch players, is a bloody good player, and I never feel confidence in our defence when he is on the field. That is no discredit to our boys at the back, but van Persie is quality, and I’d go as far as to say he is the player I dread us facing the most.

Arsenal will be wanting to assert their place at the top, and beating the Champions would certainly be a way to do that. However they have been dealt a striking blow today, when finding out van Persie will miss the next four weeks due to a knee injury he picked up whilst representing Holland. This means he will miss both the Liverpool and United games, who Arsenal play back to back.

Of course, one player does not make a team, and we’d be insane to underestimate them due to his absence, but this news has certainly brightened up my Thursday evening. Bring it on!