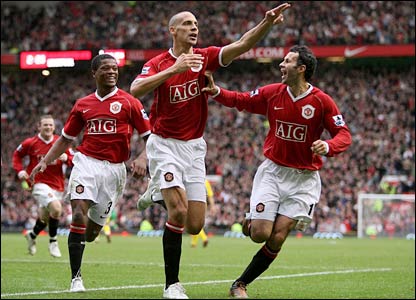 Following that night in Istanbul in 2005, Liverpool fans laud their five European Cups over us whenever they are given the opportunity. United join the likes of Barcelona, Juventus and Inter Milan with two European Cups to their name, and with a semi-final place last season, as well as a strong Champions League campaign this season, are pushing for their third in the year that marks the 50th anniversary of the Munich Air Disaster, and the 40th anniversary of winning it the first time.

Whilst Liverpool fans sing their Istanbul song, which saw them as the “Champions of Europe”, not much mention is given to the fact they were the second best team in Liverpool that year, finishing 5th in the league on goal difference ahead of Bolton, 3 points behind Everton, 19 points behind United, and a massive 37 points behind the Champions of England, Chelsea.

Rio Ferdinand has highlighted the point today that you cannot be considered a great team in Europe unless you win your domestic campaign as well as the Champions League, dishing out a dig to our Merseyside rivals.

Ferdinand has also stated his intentions of adding a European Cup to our trophy cabinet this season, claiming they have the talent and desire to do so. “We’d like to change that. This club has a great history domestically and in Europe but obviously we’d like to be a bit more fruitful in this competition because we’ve got talent, we’ve got the numbers at the moment and we’ve got the desire to do well in it this year.”

Would this season be considered a success if we won the European Cup but didn’t retain our title?