Rio Has A Word With The PM About Chelsea Game, His Brother and Arsenal's Ramsey 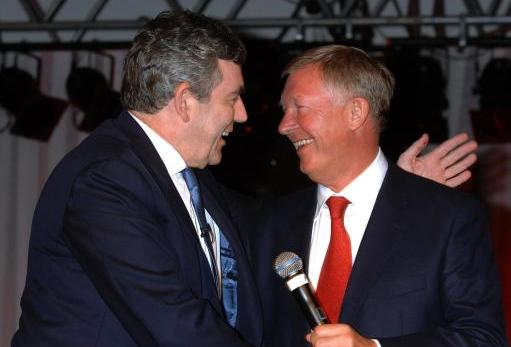 With the interview taking place the day after our 3-0 win over Chelsea, Ferdinand was quick to talk about Fergie’s genius in picking the team he did, a team no-one else would have picked. We were all shocked to see Carrick and Scholes left out, with Fletcher and Giggs in their place, but the lads did the business.

“The team the manager picked yesterday – I don’t know if you saw it, but no one in the world would have picked that team,” said Rio. “But he’s a genius, he’s unbelievable. You would have picked Scholes or Carrick, deﬁnitely; both of them were on the bench.”

Brown mentioned how David Moyes had known early on that he wanted to be a coach, taking notes from every manager he worked under.

“I’ll tell you who does that – Ole Gunnar Solskjaer,” Rio responded. “He was doing that when he was a player. He works with the reserves now, he’s good with the lads, he’s doing well. He’s a proper student of the game, he was always taking notes on what the manager said and different methods of training we used to do.”

“Arsène Wenger is very big on diet isn’t he?” questioned Brown. “And he does specialise in bringing young players on, doesn’t he?”

Ferdinand responded, talking of the diets, as well as the one that got away from United.

“I think he was one of the main reasons why, in this country, diet changed,” responded Rio. “He had a lot of diﬀerent methods and training regimes, diet and nutrition, obviously picked up from when he was in Japan. They’ve got a young lad called Jack Wilshere who’s really special. I spoke to Wenger about him when he was training with England – he’s centre midﬁeld or on the left or the right. And they’ve got that Welsh guy, Aaron Ramsey. You know he almost signed for us? The manager spoke to him, but he eventually signed for them for some reason. The manager won’t forget that.”

Then the PM and Rio had a chat about their brothers, with Brown confessing he didn’t have much of a relationship with his brothers, quite opposite to Rio and Anton.

“I used to be in goal and make him do little skills and that,” said Rio. “Obviously I was seven years older than him, so I trained him, so I take all the credit. It was lucky it was just me and Anton, to be honest. I was bored a lot of the time so I would just take him out and he had a mate the same age and I would make them play against each other all the time, and I’d always let his mate win.”